Christian Eriksen is on the verge of signing a three-year contract with Manchester United after his short-term contract with Brentford expires. 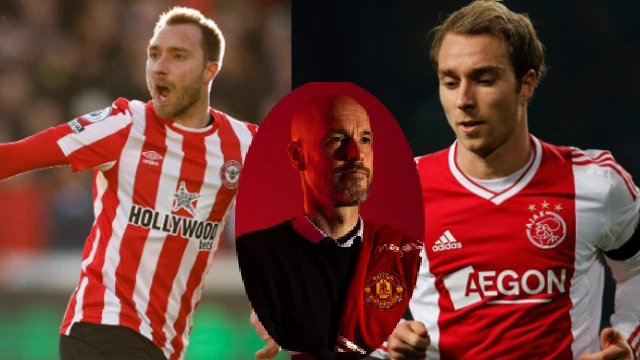 Eriksen has given his approval to the Red Devils, according to multiple reports, first covered by The Athletic's David Ornstein, and the process of completing his move is now underway.

The move will pair one of the Premier League's best players of the calendar year with a club whose form has deteriorated since the start of 2022.

Erik ten Hag, the new manager of Manchester United, is expected to bring the club back to life, and the former Ajax manager appears set to make one of his first signings.

United was interested in Eriksen earlier in his career. He made an impression on the great Alex Ferguson in 2012 after a stylish performance for Ajax in a Europa League match at Old Trafford when he was only 20 years old. They were also heavily linked with a bid three years ago when Eriksen began looking for a way out of Tottenham Hotspur. Finally, United appears to have him.

Ten Hag faces a significant rebuilding task at United, which is consistently one of the world's most expensive clubs but has not won the Premier League since 2013.

Ten Hag must have taken some time to consider signing a player who reasserted his claim to be one of the best players in the Premier League during the second half of the season.

Eriksen's achievements were made all the more impressive by his absence from the game for more than eight months before making his Brentford debut, as well as his ability to shine for a team that was playing in the Premier League for the first time and was considered a relegation contender before the season began.

Communication sent to both Man United and Brentford today morning.

Contract until June 2025, waiting for signature and medical. pic.twitter.com/63RZQWOEqh

The 30-year-old created approximately three chances every 90 minutes and scored once as the Bees finished comfortably clear of danger.

United fans will recall that the kind of inspiration Eriksen provided was sorely lacking during their team's dismal season, in which they scored the fewest goals of any club in the top eight.

United would have finished with a negative goal difference if they had conceded one more goal in their 1-0 defeat at Crystal Palace on the final day of the season.

The figure is almost unprecedented in United's history. While it is more reflective of a string of poor defensive performances, there is no doubt that a team featuring attacking superstars such as Bruno Fernandes and Cristiano Ronaldo fell far short of the sum of its expensive parts.

Ronaldo, in particular, was castigated for failing to lead a defensive press from the front, which is typical of title contenders.

There's also the fact that United is in desperate need of midfielders. They weren't particularly well-stocked to begin with, but Paul Pogba, Jesse Lingard, Nemanja Matic, and Juan Mata have all left on free transfers, and they have yet to complete a deal to sign Frenkie de Jong.

Eriksen is a versatile midfielder who excels from set-pieces, is a good passer, and possesses a vicious, accurate shot. It's no surprise that Ten Hag admires him.

Ten Hag had just finished his first season as head coach of Go Ahead Eagles in the Netherlands when Eriksen ended his three-year stint at Ajax, where he had previously been part of the former Champions League winners' youth set-up after leaving Denmark as a prospect.

Both have three Eredivisie titles as members of sides that follow Ajax's famous possession-based style, with Ten Hag being named the best coach in the Netherlands three times and Eriksen winning the award for the best footballer in the country in 2011.

Eriksen was extremely high on Erik ten Hag's list of incoming transfers after he saw the level he reached so shortly after his comeback, as per @MikeVerweij. Beautiful transfer and another chapter in his amazing comeback, wishing him all the best! pic.twitter.com/p595vUQCN5

Ten Hag favoured a formation using three attacking midfielders at the reigning top-flight champions, and Eriksen would naturally fit into one of those positions.

Eriksen is said to have spoken to Ten Hag, who was announced as the next United manager in mid-May and officially took over at the start of July, and been impressed by his plans.

Is it safe for Eriksen to play?

The midfielder officially confirmed his desire to play again, saying in early January: "My goal is to play in the World Cup in Qatar. I want to play."

"It's my dream to come back. I'm sure I can come back because I don't feel any different. Physically, I'm back in top shape," Eriksen added. "It's up to the manager to assess my level, but my heart is not an obstacle."

There has been no detailed diagnosis of the cause of Eriksen's cardiac event during Euro 2020, and reports since then have suggested that it is still unclear what caused the heart stoppage. Originally, experts would advise athletes with ICDs not to return to any sport more strenuous than golf, according to Dr Bradley. Some people are starting to trust the devices more, but there is still a risk.

What is an ICD?

The device that Eriksen has been fitted with is known as an ICD, or an implantable cardioverter-defibrillator. This device is implanted under the skin near the collarbone and connected to the heart via tiny wires

In patients with known heart problems, the device can detect irregular or stopped heartbeat and deliver an electric shock to restart the heart, much like an external defibrillator.

Some newer versions of the device can also function as a pacemaker, not only shocking a stopped heart but also delivering more restrained electric currents to regulate a slowed or irregular heartbeat.

This device has previously been given to other professional football players. Fabrice Muamba, who suffered a heart attack while playing for Bolton Wanderers, was fitted with this device after a miraculous recovery, but he never played professionally again.

Former Manchester United defender and current Ajax captain Daley Blind has also been fitted with an ICD after an episode experienced in a 2019 Champions League match. He returned to senior-level play after the incident and in the 2021/22 season, Blind was ever-present in the Ajax first team.

United's priority for central midfield was deemed to be Barcelona’s Frenkie de Jong, but Eriksen has been seen as an alternative option should the two sides fail to come to an agreement for the Dutch international.

He left Spurs in 2020 to join Inter Milan and won the Serie A title under Antonio Conte.

Eriksen made 11 appearances for Brentford after arriving on a free transfer in January and scored one goal. He says he has a desire to play Champions League football again.