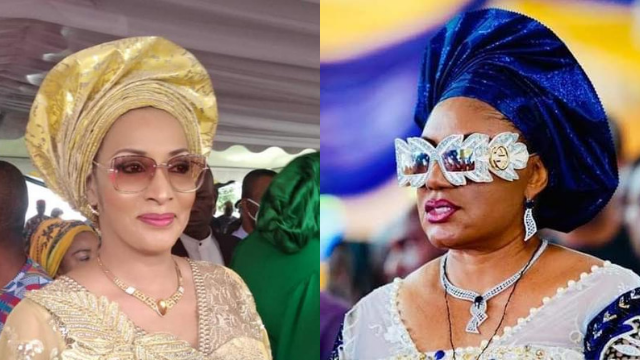 The wife of outgoing Governor Willie Obiano, Ebelechukwu, had a brawl with Mrs Bianca Ojukwu at the inauguration of Prof Chukwuma Soludo as governor of Anambra state on Thursday.

The incident occurred immediately after Soludo took his oath of office, according to a correspondent for the News Agency of Nigeria (NAN) who was on the scene.

According to NAN, dignitaries, including Ex-Gov Obiano, were already seated when Mrs Obiano entered and slapped the widow of Dim Odumegwu Ojukwu, who was seated in the front row.

However, according to AIF Media, who were also present at the event, the fight began when Mrs Obiano, who arrived late, was going around greeting the dignitaries. Ebelechukwu said as she approached Bianca's seat: "Bianca, I thought you said you'd never attend another APGA event again."

The Ojukwu's who had been riled up by that stupid remark jumped to their feet, slapped her on the back of the head, and dragged her wig off her head.

This disrupted Prof Charles Soludo's oath of office and the signing of some documents.

Watch the Video below:

The action drew the attention of security agents and some celebrities, who yanked Mrs Obiano from her grip on Bianca, who was visibly shaken by the incident.

Mrs Obiano was later escorted away, and her husband left shortly afterwards because the incident occurred after the new governor was sworn in.