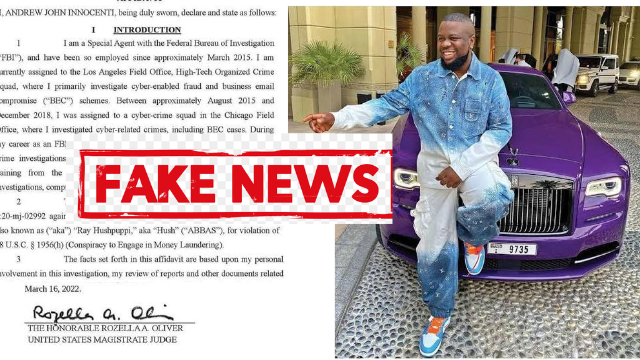 The US government has labeled reports claiming that Ramon Abbas, also known as Hushpuppi, laundered more than $400,000 in prison as fake news.

On Wednesday, multiple reports stated that US prosecutors presented documents to the US District Court of California with new evidence indicating Mr Abbas committed fraud and money laundering at the US Federal correctional facility.

According to the documents, Mr. Abass was involved in the purchase and laundering of Economic Impact Payment debit cards obtained from stolen data of US citizens and residents.

According to prosecutors, inmates are allowed access to phone calls, video calls, and the internet while being exempt from monitoring in order to protect their right to privacy.

However, security officers at the correctional facility observed Mr Abbas exceeding his permitted internet usage between January 28 and March 4.

In response to the reports, Gary Warner, Director of Research in Computer Forensics at the University of Alabama, stated that the document used to support the report is a doctored version of a June 2020 affidavit.

Warner went on to say that the edited document was designed to entice people to visit a scammer website.

"People are asking me if it is true that #Hushpuppi laundered $400,000 in #Stimulus cards from prison," he tweeted. The document they display is an edited version of a June 2020 Affidavit. The new version is a forgery designed to entice people to visit a scammer EIP website."

In a similar development, The Nation reported that the Director of Media Relations for the United States Attorney's Office, Thom Mrozek, declared the new documents to be fabrications in response to an email inquiry.

Mrozek also stated that the United States Attorney's Office in Los Angeles, which is currently prosecuting Hushpuppi for a separate offense, has not completed any such document.

He said, “After looking at the document excerpted in recent media accounts, the documents appear to have been fabricated.

“The U.S Attorney’s office in Los Angeles which filed the case against Mr. Abbas, has not filed any such document.

Hushpuppi is currently on trial in the United States for business email compromise and other scams.