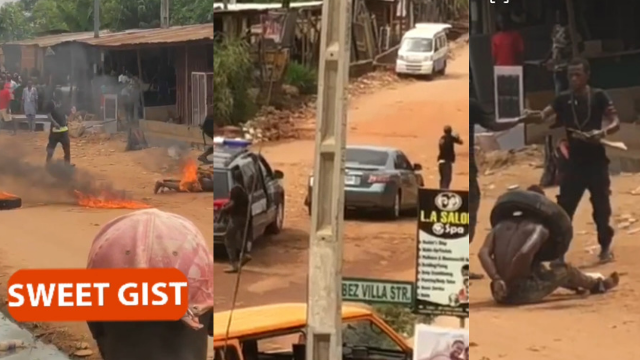 According to information received by SWEET GIST, a group of armed gunmen attacked the permanent site of Nnamdi Azikiwe University on Tuesday.

Scroll down to watch the video

At about 12 p.m., a group of heavily armed gunmen attacked the popular Miracle Junction area in Ifite Awka, UNIZIK.

However, the armed men were apprehended by the Ifite Awka Vigilantes Squad, who exchanged fire with them.

According to a source who has pleaded to be anonymous, one of the Vigilante was killed in the process of the several gunshots.

As reported the said armed gunmen came to extract one of their own, who was in the Vigilante group custody but their plans failed.

While the rest of the gunmen managed to flee, the same who they came to extract was apprehended by security personnel in an attempt to run away. He was burnt alive with fuel at the Miracle Junction Road.

It should be noted that Awka has been dealing with a slew of security issues since last year. If not cult clashes, it is unknown gunmen or other political thug clashes, and this particular miracle junction has served as a reference point for these serious crimes.

Security has been increased in the area, despite the fact that tensions remain high in the aftermath of the development.

However, security personnel have assured the public of their safety and urged them to go about their normal activities.

Attached below are videos from the attack scene that were shared with us via WhatsApp.

Information reaching us has it that the gunmen however were intercepted by the Vigilantes group and one of the gunmen was brought down. pic.twitter.com/6mHsZLdkt0