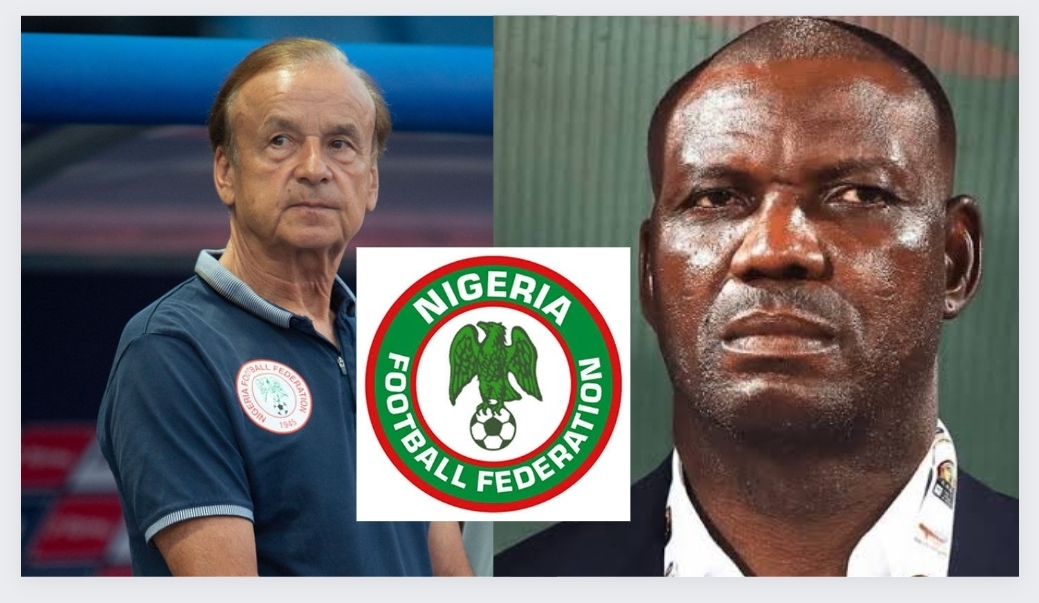 After Nigeria failed to qualify for the 2022 Qatar World Cup, some Nigerians took to social media to demand that the Nigeria Football Federation apologize to former Super Eagles coach Gernot Rohr.

Nigeria drew 1-1 with Ghana at the Moshood Abiola Stadium in Abuja on Tuesday but failed to qualify for football's biggest showpiece due to the away goal rule after a goalless draw with their archrivals in Kumasi last Friday.

The Eagles struggled in the second leg of the final play-off, and their hopes of competing in the Mundial were dashed by their West African rivals.

Rohr, who was fired by the NFF in December 2021 after an underwhelming performance by the Eagles, led Nigeria to the group stage, where they finished first with 13 points, ahead of Cape Verde, who finished second with 11 points.

Following Nigeria's failure to qualify for the World Cup in Qatar, some fans took to social media to demand an apology to the Franco-German.

Osasu Obayiuwana wrote, “Nigerian football and Nigeria owe a big apology to Gernot Rohr. The @NGSuperEagles have reaped the bitter fruits of that unjust sacking by the NFF. Now, it is time for the governors of Nigerian football to face their day of reckoning.”

Another sports journalist, Ibukun Aluko, said, “We didn’t need to sack Gernot Rohr, that man was getting us into every competition easily, but Nigerians demanded for good football!!

“If anything at all, I’m happy that Gernot Rohr has been Vindicated!”

“Gernot Rohr qualified us for the World Cup with game to spare. Some said ‘wetin this oyinbo coach dey do wey our local coach no fit do. They sacked him end we can’t even reach the World Cup.” Oma Akatugba simply wrote on Twitter. 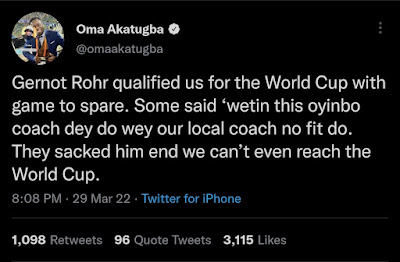 A Twitter user with the name, Timmy Leyin added, “I need the apology to be as loud as the disrespect. Gernot Rohr would never disappoint in such a crucial game.”

“Gernot Rohr would have done the needful. NFF and Nigerians disrespected him. He needs some apologies please because Eguavoen and Rohr no be mate,” he tweeted. 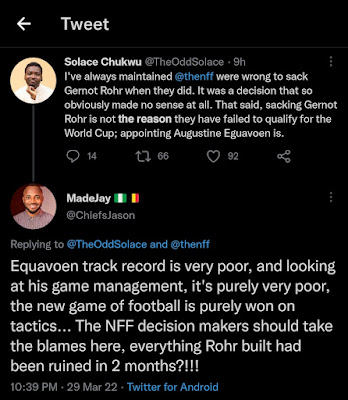 Ikakke Ekanem questioned the NFF’s decision to retain Eguavoen after the AFCON.

“NFF stop playing politics with Nigerian football. The initial plan was Eguavoen to take Super Eagles to AFCON and Jose Peseiro to play the WC qualifiers.

“Why was Gernot Rohr sacked if an underperforming Eguavoen who couldn’t pass round of 16 at AFCON is allowed to play WC qualifiers?” 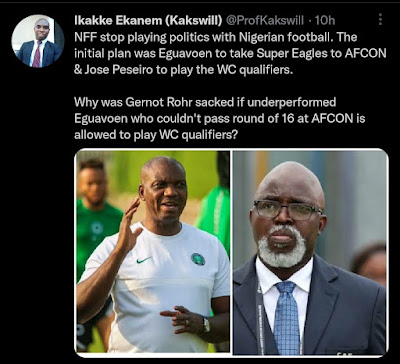