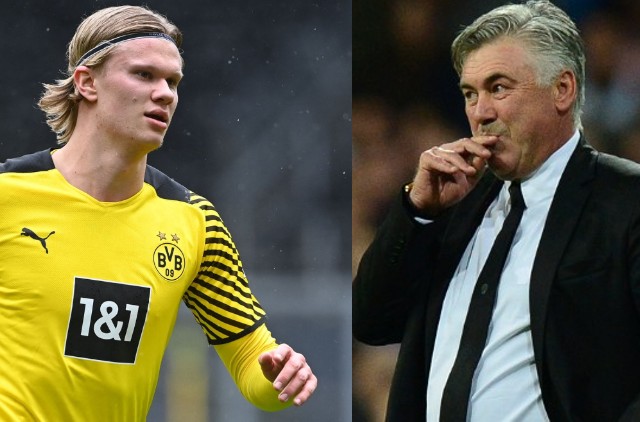 Real Madrid played a goalless draw with Villarreal at La Liga's Mestalla Stadium on Saturday. Despite dropping points, Carlo Ancelotti's side remain at the top of the table after 24 games, four points above second-placed Sevilla.

Meanwhile, the Blancos got a boost in their pursuit of Erling Haaland.

Real Madrid have received an unusual boost in the signing of Erling Haaland.

According to Bild, a secret meeting was held at Adidas headquarters on February 7, with Haaland, his father and his close friend Zidane Zidane, and Haaland's childhood idol Michu. joined the meeting.

The aim is to persuade Haaland to sign with Adidas, with Zidane's presence seen as decisive in making that happen.

The German brand is hoping to sign a deal on behalf of the Norwegian striker after signing a contract with Nike in January, and they will spare no effort to do so.

Haaland has been in amazing form since joining Dortmund in January 2020. The Norwegian has scored 80 goals in 83 appearances for the Bundesliga giants. Los Blancos hope to bring him to the Santiago Bernabeu this summer.

3⃣| 🗣️ Adidas had a secret meeting with Erling Haaland entourage on last Monday. Zinedine Zidane and Michu flew to Germany for this meeting. They want Haaland to be the face of the company. Adidas even designed their own Haaland logo with the initials "EH". [BILD]#BVB pic.twitter.com/6jbUxdJmMa

The Spanish side are looking to add more advantages to their offense this year. Carlo Ancelotti's list includes one of the best strikers in the world, Karim Benzema. However, the Frenchman is entering the twilight of his career, so Ancelotti hopes to find a long-term successor as soon as possible.

Haaland fits the bill and could be traded for a low price this summer. His release clause will reportedly be reduced to 75 million euros at the end of the season. There is already a straight line in his service, with many clubs across Europe interested in him.

If the 21-year-old signs a contract with Adidas, he may find it easier to move to Real Madrid in the future. The German conglomerate has a direct association with the La Liga giants and represents many of their players.