We Will Set Up A Committee To Review The Constitution – Says Lawan
Ahmed Ibrahim Lawan Short Bio
Ahmed Ibrahim Lawan is a Nigerian senator who represents the All Progressive Congress in the Yobe North Constituency of Yobe State. ... In 2019, he emerged the new Senate President of the 9th National Assembly with 79 votes cast to beat Senator Mohammed Ali Ndume with 28 votes.
Source ==>> https://en.wikipedia.org/ 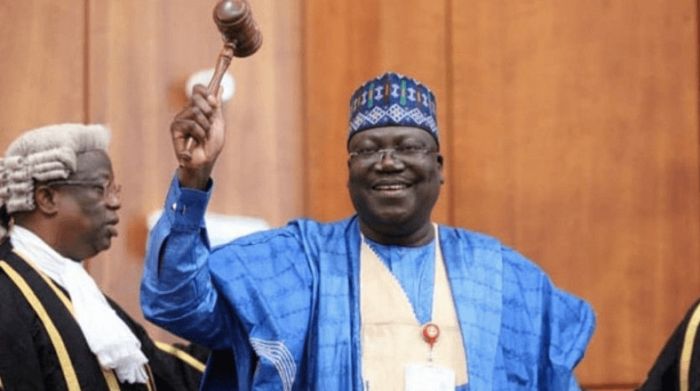 Ahmed Ibrahim Lawan
President of the Senate, Ahmad Lawan, says the upper legislative chamber would set up a committee on the review of the Nigerian Constitution.
Lawan said the Constitutional Review Committee has not been set up because the Senate has been pre-occupied with other issues like the 2020 budget.
The Senate President spoke while receiving in audience the European Union Ambassador to Nigeria and ECOWAS, Ketil Karlsen who paid him a courtesy visit on Wednesday, December 4, 2019.
He, however, assured the nation that the committee will soon be put in place.
“Very soon, we will constitute our Committee on Constitutional Review. We haven’t done so yet because we have been engaged so much more with other issues,” Lawan said.
“We believe that by the time we passed the budget, then our committee on Constitutional Review will be put in place.
“By next year January, the committee will start some work because we already have some references that require some kind of constitutional review,” he announced.
The Senate President informed his guest of his will and determination to carry out reforms.
Lawan expressed appreciation to the support the EU has been extending to Nigeria particularly in the areas of the electoral process and political development and cooperation.
“Our democracy since 1999 has received a lot of support from the EU and this is making very positive impact.
“The relationship between the EU and the Nigerian government is not like it is with other organizations.
“We also have a relationship at the level of the legislature. We have the EU-ACPU joint parliamentary Assembly.
We believe this is one area thru which we can continue to discuss issues that affect us in relation to the EU or what we think we can be doing together,” Lawan said.
Lawan asked the EU for more support in the area of the capacity building particularly for the Senate Committees on INEC, National Planning and Finance.
AfricaNewsNigeria