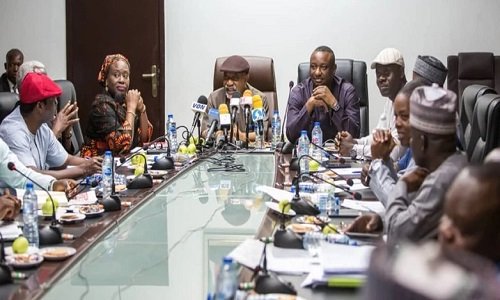 Edo, Adamawa, Anambra, Osun, Rivers, Cross River and Kano state governments on Friday embraced the minimum wage deal struck by the federal government with labour earlier in the day but said they were awaiting the details  to enable  them reach their own decision.

Kwara State on its part said it would have its own negotiation with labour at the local level while Katsina and Niger were undecided on the next line of action at press time.

The Delta State Government was not immediately forthcoming on what it would do.

The federal government and labour resolved their differences on the consequential adjustment to the salaries of senior civil servants towards the full implementation of the new minimum wage at a meeting that dragged late into the early hours of on Friday.

Abia State Commissioner for Information, John Okiyi-Kalu, told The Nation on the phone that although the state government was willing to pay the new wage, it would make its position clearer after studying the details of the Abuja agreement.

“As soon as we get the salary table from the federal government, we will do a formal report on that,” Okiyi-Kalu said.

In a separate interview, the chairman of NLC in the state, Comrade Uchenna Obigwe, said labour would ensure the implementation of the deal in the state.

Governor Willie Obiano of Anambra State says he is committed to the implementation of the deal in his state.

Addressing  the 2019 Quadrennial Delegates Conference of the Medical and Health Workers Union of Nigeria (MHWUN) in Awka on Friday, Obiano said payment of the new wage “will be effected immediately the guidelines for implementation are released.’’

He however, appealed for understanding, calm and sense of discretion from workers.

He reminded workers of his commitment to their welfare, even before the minimum wage issue was raised by labour.

Edo Too
Also reacting on Friday, the Edo State Government said it was prepared to adopt the minimum wage and the consequential adjustment to salaries of senior civil servants as agreed between the Federal Government and Labour.

Governor Godwin Obaseki’s Special Adviser on Media and Communication Strategy, Mr. Crusoe Osagie, said labour leaders in the state were working with government on the full implementation of the minimum wage.

“We have always said we will pay. Any agreed template will be paid,” Osagie told The Nation

Governor Ben Ayade’s Special Adviser on Media and Publicity, Christian Ita, said there was no going back on the plan of the state government to pay the new minimum wage.

He said: “Governor Ayade has on more than one occasion expressed willingness to pay the new minimum wage, once the modalities have been finalised by the Federal Government.”

The state chairman of the Nigeria Labour Congress (NLC), Comrade Benedict Ukpebi, said: “Here in Cross River State, we are waiting for the template from the federal government.

“Now that an agreement has been reached, we are hoping that they come out with the template on time.

“I hope the federal government, through the Salaries and Wages Commission, will speed up the release of the salary schedule and send it to the states for implementation.”

’Adamawa will implement wage as agreed’

The Adamawa State Government is similarly willing to respect the Abuja agreement.

Mr. Solomon Kumangar, the Director General in charge of Media and Communications to Governor Ahmadu Fintiri, said on the phone yesterday that his principal remained committed to his earlier promise to abide by whatever the Federal Government agreed with labour on the issue.

“He (Governor) told the people on 1st October, just a little over two weeks ago, that once the consequential issues are sorted out, they could rest assured that he would pay,” Kumangar said.

He said now that the sorting out has been done, “the Adamawa State Government will be willing to implement and pay the new minimum wage.”

Kumangar said there would be no question of pondering over the agreement reached between the labour unions and the Federal Government.

”He (Ahmadu Fintiri) had even promised before his election that he would pay whatever minimum wage became the established order. He won’t back out of that promise.”

He said the governor would be expected to keep his word, adding: “I am confident that Governor Fintiri will do as he has pledged.”

We’re all for the agreement, says Osun govt

The Osun State Supervisor for Finance, Mr. Bola Oyebamiji, said yesterday that the state government only needed to get the modalities to commence the implementation of the new wage structure for its workers.

“Governor Oyetola is interested in the welfare of every citizen of the state, including the civil servants,” Oyebamiji said.

“The state government will further engage the workers on the matter and at the end of the day everyone will have cause to smile.”

The state chairman of the Nigerian Labour Congress, Comrade Jacob Adekomi, described the response of the state government as good news for its workers.

”As workers, we expect nothing less from the state government than to do the needful on this matter,” Adekomi said.

No problem implementing the deal in Kano, says HoS

The Kano State Head of Service, Alhaji Kabiru Shehu, says the state will have no problem getting the deal done.

“We have no intention of retrenching workers. We have no problem paying the minimum wage. However, we will still have to meet with Labour leaders.

”We will discuss with them and harmonise. Here in Kano, we have been maintaining a robust and cordial relationship with labour leaders and workers.

”So, with this development, I don’t think there will be cause for disagreement. We have been up-to-date with payment of salaries. So, there is no cause for alarm.”

Governor Nyesom Wike of Rivers State pledged on Friday that he would not let civil servants in the state down on the new minimum wage issue.

The governor’s Special Assistant on Electronic Media, Simeon Nwakudu, said the state government meant business when Wike declared during the commissioning of the new Labour House in Port Harcourt that he would commence payment of the new wage as soon as the template was released.

Nwakudu said: “The state Governor Wike has always said that he will begin to pay the new minimum wage to the state workers the moment the FG releases the template and directives on how to go about it.

’It is common knowledge in the state that the governor has always sounded it loud and clear that he will pay.

“He is only waiting for directives from the President. The new wage has never been an issue of dialogue in the state, and I can assure the public that the governor will begin the payment as soon as it is approved.”

Also in her reaction, the state chairman of the Nigerian Labour Union, Lady Beatrice Utubor, confirmed that the state NLC is now waiting for the template from Abuja to begin to push for implementation.

Ondo State Information Commissioner Donald Ojogo said that Governor Rotomi Akeredolu has already set up a committee on the implementation of the new wage structure in the state.

He said that the committee was yet to submit its report, and until it did, there was nothing much the government could do.

No decision yet in Niger, Katsina

The Niger and Katsina state governments are yet to decide on the consequential adjustments.

The  Chief Press Secretary to the Niger State Governor, Mary Noel Berje, said yesterday that Governor Abubakar Sani Bello would  meet with the state executive council to take another look at  the resources of the state to enable it decide its next line of action.

She said: “The Governor had said that he would pay the N30,000 minimum wage but this new agreement is a different deal which the government needs to look at critically before it agrees to it.

Responding on Friday to a question from The Nation, Ajakaye said: “Kwara State will definitely enter into independent negotiations with the workers on the way forward regarding the minimum wage.

AbdulRazaq, shortly after his assumption of office, had expressed his readiness to pay the N30,000 minimum wage after due consultations with civil servants in the state.

He added that implementation of the new minimum wage would be predicated on a proper assessment of the financial situation of the state.

The governor also promised to ensure prompt payment of salaries.

“We would not label anyone. We will carry everybody along and will promote a culture of transparency and independence,” he said at his first meeting the civil servants.

He added: “We want Kwara to regain its rightful place, particularly in the North where it used to be the number one in terms of education and so on.

“We’ll discuss the minimum wage. The intention is to pay but we need to sit down and resolve a few issues. There has been so much plundering of the state resources but we will rise above all that.

“We’ll ride on your back to get things done while your welfare is taken care of.”

Officials of the Delta State Chairman were all mum on the issue yesterday although the chairman of the state chapter of the NLC, Mr Goodluck Ofobruku, was confident that government would not disappoint.

Ofobruku said the workers did see a situation where the state would refuse to implement the consequential adjustments, stressing that “the state’s will tag along with the Federal Government because this was what was agreed by the NLC and TUC our parent body.”

Besides, he said Governor Ifeanyi Okowa had always pledged to implement “whatever is approved.”

Delta Governor’s Chief Press Secretary, Olise Ifeajika, promised to call The Nation back yesterday, but he never did at press time.

Kaduna first off the blocks

The Kaduna State Government has already started paying the new minimum wage; the first state to do so.

The state Executive Council in August gave approval for the implementation of the new salary structure effective from September 1.

The government in a statement issued at the end of the meeting said it was guided by the twin principles of ability to pay and sustainability. “The government considered several scenarios, bearing in mind the trend of internally generated revenues and allocations from the federation account.

“Paying the new national minimum wage and consequential adjustments will increase the wage bill of the Kaduna State Government by 33%. Gross monthly salary outlay will rise to N3.759bn from the current N2.827bn.

“This almost N1bn monthly increase in the wage bill means that salary and pension commitments will take the lion’s share of state government expenditure. Meeting these salary obligations while meeting development objectives for citizens will further raise the pressure to expand and deepen revenue sources and collections.

”According to the new wage structure, the lowest paid workers in the civil service enjoyed increments of as much as 67%. Middle-ranking officers from Grade 10 to 14 were awarded increments of 60%.”