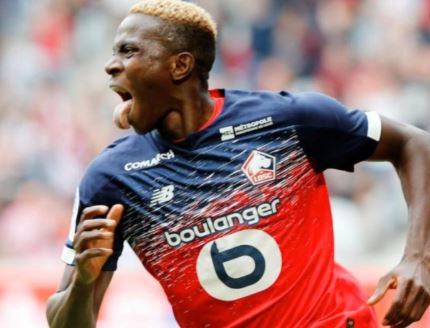 CHELSEA’S coach, Frank Lampard has described Lille of France striker, Victor Osimhen as a player with a lot of potential to be great in future after the Nigerian scored against his team in the UEFA Champions League game on Tuesday.

Osimhen first champions League goal could not prevent his team, Lille from going down 2-1 at home loss to Chelsea. The Nigerian striker also had a chance to level scores toward the end of the games but Chelsea’s goalkeeper Kepa Arrizabalaga made a good save to deny the Nigerian hitman.

Lampard in a post-match interview,  admitted that the 20-year-old Nigerian  was a threat to his defenders with his speed and agility during the encounter.

The Chelsea legend, who recorded his first victory in the UEFA Champions League said: “In the preparation for this game, I have been watching his (Osimhen) performances for the season and now I know his story as well.

“He’s hugely impressive and I know tonight match is going to be a very tough match for our defenders, not just for him but for their attacking threat. They (Lille) have a lot of speed, there is performance individually and I thought he (Osimhen) was really good and he has to get the defenders probably all the time as he likes to run behind defenders.

“He is fast; he has everything and I think it was tough for us to play against him so I wish him well. His story is great where he has come from, where he is now and it looks like a fantastic career ahead of him,” said Lampard.

An excited Osimhen thanked God for scoring his first Champions League but was not happy that they lost the tie.

“Not the result we wanted, but we will keep fighting to get it right, major thanks to GOD almighty for my first @championsleague goal, we move @losclive,” Osimhen wrote on his Twitter handle.

Lille remains bottom of Group H after two defeats from their opening two games of the competition.

They will face the Spanish side, Valencia in their next game.