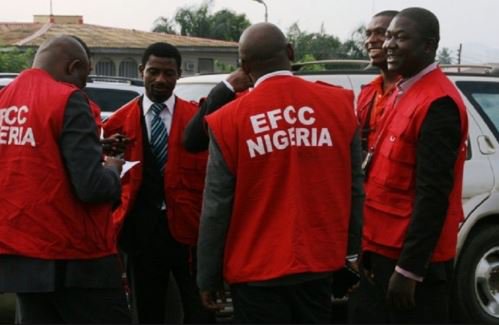 AS Nigeria being shortchanged of accruable revenue from permit and alien cards issued to foreigners to stay in the country?

The permit is always issued to non-ECOWAS foreigners resident in Nigeria.

The company is also being probed over how N500 million of the cash ended up in a Bureau De Change in Abuja.

The EFCC is suspecting that the N500million was allegedly used by the firm to bribe some top government officials.

There were allegations of under-payment of Withholding Tax (WHT) and Value Added Tax (VAT) by the company which will be verified by the Federal Inland Revenue Service (FIRS).

About 12 people, including a Deputy Comptroller-General of Immigration and three officials of CONTEC, have been quizzed by detectives.

So far, preliminary investigation showed that the firm will be requested has to refund N3, 157,588,362.50 overpayment to the Federal Government.

Investigation revealed that the CERPAC scheme has been trailed with controversy bordering on alleged shortchanging of the Federal Government by CONTEC, a foreign firm, engaged for the project.

Apart from arbitrary increase of the amount payable by every expatriate from $250 to $1,000 and $2,000, there had been concerns that the revenue sharing formula is not in favour of Nigeria.

Despite the fact that the sharing formula has been reviewed four times since 1999 when the company was engaged, many government officials are worried that the MoU with the firm is lopsided

Following a petition, the EFCC mobilised its detectives to probe the CERPAC pact and activities.

The company is under probe for alleged “conspiracy and diversion of public funds.”

The firm was however directed to refund N3,157,588,362.50 as overpayment for the establishment of additional CERPAC issuing centres.

The document said: “The records available based on the agreement signed by the Ministry of Interior and CONTEC in 1999 and the response from the ministry dated 11th September 2019 indicated that the cost of establishing one centre is N522,499,312.50

“Based on the above calculation, there is overpayment of N3,157,588,362.50 which was received by CONTEC as part of the cost for establishing  29 CERPAC additional issuing centres.

“CONTEC has to refund the outstanding balance of N3,036, 836, 221.50 to the Federal Government as overpayment for the cost of 29 CERPAC issuing centres. However they claimed that the said balance is meant for the training and software licensing for the centres.”

The EFCC detectives were said to be probing alleged withdrawal of N500million from CERPAC accounts as bribe payments for top government officials.

“About N500million was paid to a Bureau De Change operator, in Abuja.

“We think that these payments are kickbacks to some government officials but that cannot be established as we are yet to retrieve the records of transactions,” the document added.

The records of how the N500million was disbursed were being traced as at press time.

“We think the Federal Government is being cheated with the present sharing formula of 33 per cent hence calling for the review of the sharing formula.

“Also, we think CONTEC underpays its Withholding Tax and Value Added Tax (VAT) to the Federal Government based on payments made to the directors of CONTEC. There is need for reconciliation of these payments in conjunction with Federal Inland Revenue Service (FIRS).”
Next Post Previous Post
No Comment
Add Comment
comment url
Africa,News,Nigeria