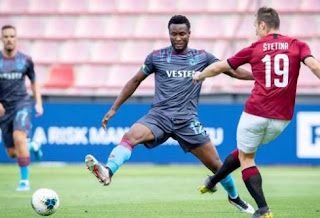 FORMER Nigerian international, Mikel Obi was on for 90 minutes as his Turkish team, Trabzonspor played a 2-2 draw at home against Basel in Thursday’s Europa League game.

Basel drew the first blood in the 20th minute of the first half with a well taken goal by Silvan Widmer, while Abdulkadir Parmak replied for the Turkish side in the 26th minute.

Anthony Nwakaeme, who was a 46th minute substitute for Donis Avdijaj in attack, provided the assist for Jose Sosa to score the second goal for the homers in the 78th minute. However, Noah Okafor equalised for Basel two minutes after as the game ended 2-2.

Meanwhile, Arsenal made it six points from a possible six in the Europa League this season with a 4-0 victory over Standard Liege on Thursday.

Gabriel Martinelli scored twice in quick succession before Joe Willock added a third in a clinical first 22 minutes from Unai Emery’s side.

Dani Ceballos netted his first goal for the club in the second half to cap a routine win for the Gunners, who are already looking a solid bet to reach the next round.