‘Where You Are Born Determines Your Future’ 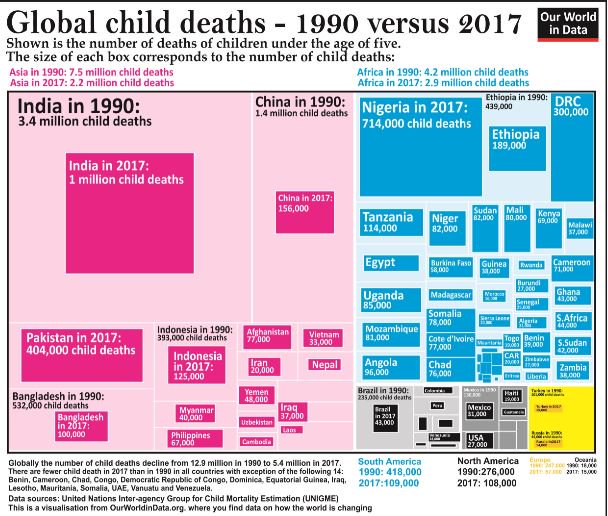 The Goalkeepers Data Report, which the Bill and Melinda Gates Foundation plans to produce every year through 2030, is timed to the annual gathering of world leaders in New York City for the U.N. General Assembly. OLUKOREDE YISHAU examines this report, which shows that despite progress made, the health and education indexes in Nigeria are far from desirable

BILL and Melinda Gates have in the last few years worked to improve a lot of countries in sub-Saharan Africa and beyond. Nigeria is one country, where their foundation has an office, and they have partnered with Africa’s richest man Aliko Dangote to help Nigeria get the health of its people right.

Two days ago, they released their Gatekeepers Report 2019. One key takeaway from the report is: “Where you are born is more predictive of your future than any other factor.”

The Gates’ observation tallies with a World Bank Human Capital Index, which shows that “children born in Nigeria today will be only 34 per cent as productive when they grow up as they could be.”

Gatekeepers Report 2019 shows that Nigeria’s health indicators have improved.  In the late 1990s, it was estimated that two out of three Nigerians were living in poverty. That represented 68 per cent. Twenty years later, the figure has dropped to 32 per cent of the population or one in three Nigerians.

Sixty-four per cent of children used to suffer from malnutrition in 2005. This went down to 37 per cent last year, according to figures supplied by the foundation.

Only about half of Nigerians used unsafe or unimproved sanitation in 2018 compared to 80 per cent in 1990.

As good as these improvements are, Nigeria still ranks 43rd of 52 African countries on a recently compiled sustainable development goal index. The implication of this is that the country has gone 47 per cent towards achieving sustainable development goals. The Gatekeepers Report lists the country as one of those who will not meet the SDGs 2030 deadline.

Being the biggest Africa’s biggest economy, so why is it ranked so low? Gatekeepers’ report 2018 observed that poverty is concentrating on just a handful of very fast-growing countries. By 2050, for example, more than 40 per cent of Congo and Nigeria.”

Closely tied to this is the fact that Nigeria still has the second-highest number of deaths of children under the age of five. It tags behind India.

It added that across sub-Saharan Africa, girls have an average of two fewer years of education than boys. In Nigeria, according to the World Bank, girls get an average of 7.6 years, and boys get 8.7 years.

The report recommends that “human capital investments should be designed to reach girls and prioritise those countries and districts that have to make up the most ground”.

The report also observes that education is not enough to bridge the gender divide.

“In some countries where girls tend to be well-educated they are still underrepresented in the workforce because they also face discriminatory norms and policies.

“Africa’s youth population (people aged 0 to 24 years) is booming while the rest of the world is shrinking,” says the report.

The report showed that Measles-Containing-Vaccine second dose (MCV2) was low at 39.27 per cent, Diphtheria-tetanus-pertussis (DTP3) immunisation coverage was 36.39 per cent.

The report also revealed that the vaccine coverage for Pneumoccocal conjugate vaccines (PCV3) was at 35.67 per cent.

The Gates in the 2019 Gatekeepers’ Report entitled: “Examining Inequality 2019,” say: “Gaps between countries, districts, and boys and girls prove that the world’s investments in development aren’t reaching everyone.

“Using new sub-national data, the report uncovers the vast inequalities within countries that are masked by averages.

“Despite gains in female educational attainment, opportunities for girls are limited by social norms, discriminatory laws and policies, and gender-based violence.

“As we write, billions of people are projected to miss the targets that we all agreed represent a decent life.”

The foundation called for a new approach to development, targeting the poorest people in the countries and districts that need to make up the most ground to address persistent inequality.

“Governments should prioritise primary healthcare to deliver a health system that works for the poorest.

“Government should also deliver digital governance to ensure that governments are responsive to their least-empowered citizens, and more support for farmers to help them adapt to climate change’s worst effects,” it said.

It added: “The report is designed to track progress in achieving the Global Goals, highlight examples of success, and inspire leaders around the world to accelerate their efforts.

“The goal is to identify both what’s working and where we’re falling short,” it said.

Bill Gates, in an interview to launch the report, said:” Nigeria is a super-important country and one that the foundation has an office there.  We did a lot of work in Nigeria on polio and we learned a lot doing that.  Nigeria has gone almost three years now without having a polio case.

“The biggest priority we have, although making absolutely sure we’re done with polio remains a big priority, now we’re able to focus even more on the primary health care system.

“In Nigeria for a lot of the work we do there we’re partnered with Aliko Dangote, who helps us understand who the good partners are and exactly how we can reach out to groups like the traditional leaders and get them involved in these efforts as well.

“So, Nigeria is important, I’m hopeful about Nigeria.  As you see in the report, the disparities within Nigeria are quite stark.

“Also, one challenge that Nigeria has is that the amount of money that the government raises domestically is quite small compared to other countries.  A lot of countries at that level will be raising closer to 15 per cent of GDP and Nigeria is one of the lowest in the world down at about 6 per cent.  And so, it is a huge challenge that when you want to fund infrastructure, health, education, all those things, that over time the tax collection, the domestic resources are going to have to go up quite a bit.

“That’s a long-term effort and I think partly by making sure the current resources are spent well like on primary health care, you gain the credibility that the citizens will say, okay, we want more of these things.  If we don’t raise the quality, you can get into a trap where they don’t feel like paying the taxes actually has that much impact, and so they’re not supportive of that.

“So, we’re working hard.  I mentioned we do videoconferences with state governors.  If we can make the six states into exemplars, then these practices can be extended to all 18 of the northern states.  There are best practices down in the south as well that we can learn from that as well. And so, you know, building on what we were able to achieve with polio and the relationships we’ve built there and our commitment, starting with primary health care, we think that Nigeria can tackle its inequality.”