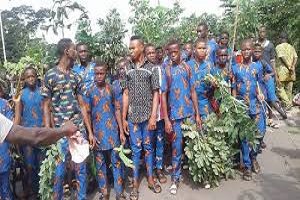 The National Association of Igbo Youths (NAIY) have expressed displeasure over comments made by Chimamanda Adichie, a writer, against Prince Arthur Eze in her recent write-up on the land dispute between Ukpo and Abba communities, both in Anambra State and warned that a leader like Eze should be accorded the respect he deserves.

Describing Eze as “a leading light of Igbo land”, the group said in a statement signed by Okechukwu Ndubuisi, its  National President; Barrister Orji Emeka, its National Secretary and Nnanyelugo Chuks, its Director of Publicity, that it was “with shock and utter disbelief” that they read Adichie’s recent comments.

“We take this step because Prince Arthur Eze is an uncommon persona and an enigma of the Igbo race. We therefore cannot stand by and watch someone rubbish all that the Prince has worked for over the years with unblemished global acclaim.

“Prince Eze should be respected by all and sundry, if not for anything, for his philanthropic disposition in the entire Southeast, in assisting Igbo men and Nigerians in general to start-up businesses and escape the scathing heat of poverty and deprivation. This is a man who has lifted so many Igbo youths from misery and made them useful to the society,” the group said.

On the land dispute, the group said: “Many Igbo people, including those of Abba and Ukpo communities have the historical records of the land dispute which Chimamanda has now dabbled into without corresponding knowledge.

“But we hasten not to put all those facts into writing in view of the fact that the Supreme Court had ruled on this issue and the judgement has put to rest the controversy and affirmed that Ukpo community is the rightful owner of the disputed land.

“So for the Abba community, where Chimamanda claims to hail from, to now go to a lower court to file a fresh case to hear the matter again as stated by Chimamanda is to say the least, a case of judicial rascality and abuse of judicial processes. Chimamanda has exposed herself that she is not vast in the jurisprudence of the Nigerian legal system, because every pronouncement by the Supreme Court is not only binding on the parties but is an authority which can be cited in other courts and cases,” NAIY said.

The novelist, Chimamanda Adichie, had, in an article entitled, ‘My Hometown Under Siege,” accused Prince Arthur Eze of being the mastermind behind attacks on her people over the disputed land. According to her: “Prince Arthur Eze has a documented history of muscling his way into contested land – in the past few years he has used the police to terrorize another nearby town, Abagana, after which he annexed their land. But perhaps the clearest evidence that Prince Arthur Eze is the mastermind of the harassment in the Abba-Ukpo case comes from his own words.”

It would be recalled that although the Supreme Court, in its judgement, declared Ukpo community as the rightful owner of the land, Abba community reportedly took the matter back to a lower court.