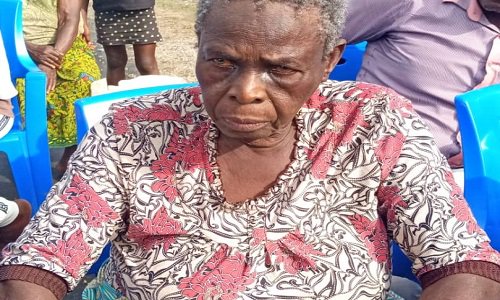 She wept like a baby, tears rolling down freely from her eyes before a battery of television cameras and a horde of reporters.

The 80 years old grandmother was reliving her 75 days experience in the custody of her abductors, who freed her on Sunday.

“It was terrible,” she said asking: “Why do they like to kidnap me?”

Madam Beauty Uguoere Siasia inadvertently answered the question, saying, “They said my son is a millionaire.”

The abductors of the mother of former Super Eagles coach Samson Siasia are  ready to make money from what has become a lucrative business —kidnapping for ransom.

It was the second time she was being kidnapped. The first time in November 2015, she was released after 12 days in captivity. Perhaps, those who did it then made a haul and returned or it is a new team seeking new avenue.

Around 2a.m on July 19, some armed men stormed her home in Odoni, Sagbama Local Government Area of Bayelsa State.

They took her away.  They demanded ransom which her son did not have.

Siasia is one of Nigeria’s most successful footballers and coach.

As a striker, he scored some of the most memorable goals for the country as a member of the golden generation of the national team that represented the country in its maiden appearance at the FIFA World Cup, USA 1994.

Siasia scored Nigeria’s goal against Diego Maradona-led Argentina team in the group stage. After retirement, he went into coaching, taking the Under-23 team to enviable heights before he was upgraded as coach of the Super Eagles.

Madam Siasia said after whisking her away to an unknown place, her assailants fed her with garri and bought drugs for her.

She said: “I was in my house when they came to kidnap me. They took me to their place. They took care of me. I was sick and they bought me drugs. They cooked and gave to me. They didn’t beat me. There were days that there was no food. Those days they drank garri and gave me garri to drink as well.

”Sometimes, they cooked soup, prepared garri and we ate. But on Sunday, they told me we had stayed for too long and they were tired of our problem. They carried us on a flying boat and dropped us in a village. I don’t know the name of the village.

”They carried us to their chairman’s place. I don’t know the man. But they called him Seifa. As I am talking to you, I am not well. Before they took me, I was ill. I wanted to go to the hospital”.

On the type of house where she was kept, Madam Siasia said: They put us in a small house and use tarpaulin to cover the top.”

But another victim who was abducted when he took some undisclosed amount of money to the kidnappers, was not lucky. He had a raw deal in the hands of the abductors.

According to him, on getting to where they directed him, gunmen surrounded his boat, blindfolded him and took him away.

He recollected: “Where they kept us was very bad. I didn’t see anything there and I didn’t recognise anybody because before I got to the place, they blindfolded me.

”But the place was rough. We slept on benches. There was no foam. At times, they fed us with garri and beans. We used oil to eat garri. Sometimes, they cooked yellow soup and any how they cooked it you will eat because you want to live.

”I was in a critical condition. They were fond of beating me, maybe, because I am a man. They would beat me morning, afternoon and night. They would tie me before I sleep. Even if mosquitoes were biting me, I couldn’t chase them away.

They kept four people to guide me. I suffered a lot”.

Yesterday, Bayelsa State Police Commissioner Uche Anozia visited Madam Siasia at her residence. Police spokesman Asimni Buswait said:  ”The police command wishes to inform the general public that Mrs Beauty Siasia, who was kidnapped on 15 July, has been released in the early hours of Sunday, Sept. 29,” the statement said.

The statement added that the victim was in a stable condition and had volunteered useful information that would assist the police in their investigation.