Ohanaeze,Others Back Ban On 'Herders’ Movement In Southeast 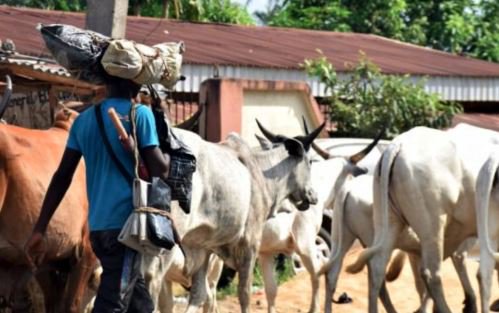 SOUTHEAST governors were at the weekend hailed for banning the movement of herders and cattle from one community to the other in their region.

Stakeholders in Ebonyi, Anambra and Abia and Enugu states including the Ohanaeze Ndigbo, threw their weight behind the governors’ decision to restrict the herdsmen and their flocks in the Southeast.

The governors, under the auspices of the Southeast Governors’ Forum (SGF) at a meeting in Enugu on Saturday with enlarged stakeholders, including religious leaders, announced the decision to restrict the movement of cattle and herdsmen across farmlands.

Ohanaeze’s deputy spokesman Chuks Ibegbu said the apex Igbo socio-cultural organisation, being part of the decision to checkmate the movement of herdsmen in the zone, was in total support of it.

He said: “It is a welcome development. We are not against their movement but there must be rules. Moving from one state to other without regulations is the main cause of the clashes between farmers and herders.

“Ohanaeze endorses the decision. Nobody is stopping the herdsmen from carrying on with their business, but they should be regulated to avoid ugly clashes.”

He said it would also guarantee safety of farmers and guarantee increase in agricultural products.

Some of the stakeholders called for more proactive measures to nip the excesses of herdsmen in the bud in the zone.

Others, who pushed for the establishment of state police, argued that the federal security agencies have been overwhelmed in tackling the growing insecurity in the region.

Speaking to our reporter in Aba, Gilbert Ezechukwu, a public commentator, said: “The only way to address this Fulani issue is by ensuring that state police is effective. If we rely on the police and other security agencies, we will still be getting the same result that we have been getting over the years.

“For me, police, army, DSS are overwhelmed and can’t do more than they have done till date. Let us try state police; it will give the state government options of engaging more hands in our rural areas. What the state police will do is to compliment the federal security agencies.

“This has been tried in the US and other advanced countries and it has worked. We should diversify our security strategy if we must make a positive impact with maximum impact.”

Aba lawyer Emperor Ogbonna said: “I think the governors are right in their position. Nobody is against the Fulani in any ramification, but the problem is that the herdsmen are offending clear laws.

“The anti-open grazing law is a law passed by almost every state in the Southeast, and the law prohibits taking cows around the place and constituting a nuisance. Despite the law, the herdsmen behave as if that law never exists.

“So, the stand of the governors echoes the laws of the states that nobody should take cattle and be parading around the states and causing trouble.

“The cows constitute a nuisance when they block the roads and eat up plants. Also, banning the herdsmen from carrying arms is a welcome development. It is in line with the law too.

“No sane governor will sit idle and see his people being massacred and do nothing. The law of Nigeria says freedom of movement, but that does not cover the movement of animals. Nobody is banning Herdsmen in Southeast but we are banning their cows moving around. Ranching is the acceptable way of animal rearing all over the world and Nigeria should not be left out

In Awka, Charles Amilo, a former Commissioner for Information under erstwhile Governor Chris Ngige, alleged that herders were using guns to terrorise their hosts.

He told The Nation: “The Federal Government has not been tough on them and that is the reason they keep carrying guns. The Southeast governors are just implementing the existing law because the only people authorised to carry guns are the military, the police and other security outfits.”