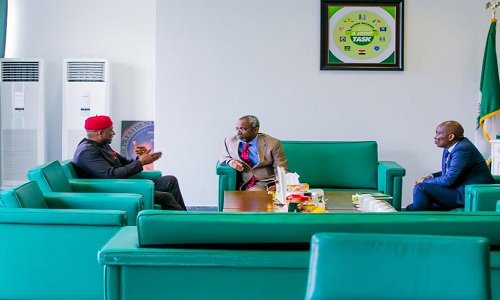 The House of Representatives on Wednesday honoured the Chairman/Chief Executive Officer of Air Peace, Allen Onyema, for patriotism.

The Green Chamber, in a motion moved by Abdulrasak Namdas (APC), also recommended Onyema to the Federal Government for a befitting National Honour for doing the nation proud.

The lawmakers expressed appreciation to him for giving succour to Nigerians in their time of need.

The Speaker instructed the Clerk to ensure that a copy of the House resolution on the businessman’s good gesture was forwarded to the Federal Government immediately.

He also directed that a letter of commendation from his office be sent to Air Peace office as well.

Gbajabiamila said the House was honouring Onyema for his high sense of patriotism.

The Speaker said Onyema was invited to appear before the House yesterday in recognition of his magnanimous decision to volunteer the use of his aircraft to evacuate Nigerians who were attacked in South Africa.

According to him, Onyema’s airline had already conveyed over 498 Nigerians from South Africa, and had returned to South Africa to airlift more returnees.

Gbajabiamila said it was a rare show of patriotism and that the House would recommend him to the Federal Government for further honour.

On his motivation for the gesture, Onyema said his decision was spontaneous: to mitigate the hardship being faced by Nigerians in South Africa.

The businessman said additional 319 Nigerians had just “checked in” from the former Apartheid enclave.

He hailed President Muhammadu Buhari for the mature manner he handled the xenophobic matter with South African authorities.

They said the honour was well deserved as the airline boss had shown his unalloyed love for the country and its citizens.

The lawmakers added that Onyema’s action had brought respect to the country and Nigerians.

They also noted that he had come up with greatly beneficial initiatives in the past which had impacted on the lives of Nigerians.

Dederi said: “Allen Onyema has always been in the forefront of positive change in the country. He was one of the initiators of the Amnesty programme in Nigeria, and Almajiri school system in the country.”

A video, which has gone viral, alleged that consulate officials were collecting 500 rand to process Nigerian passengers on Air Peace flight.

The airline management had offered to convey Nigerians wishing to return home, following the recent xenophobic attacks on foreigners and their businesses by the South African youths.

Adama said it was a ploy by some people to frustrate the evacuation process.

“The same people sent notice to Nigerians from across the provinces to park their luggage and go to the Consulate to travel the same day.

“This created serious logistics challenges and I had to accommodate all the women with children.

“Everything has gone on well, despite attempts by these groups of discredited individuals.”

He said: “These crops of diplomats that are working in the Consulate are just great and are the best we have ever seen.

“There is nothing like money being collected by anyone; not NICASA, not even the Consulate. These services were rendered free of charge. No one has ever said anyone collected money from him.

“So, I am unhappy with this fake news that people are just circulating. It is a lie.

“We are discountenancing the lie and it is unacceptable.”