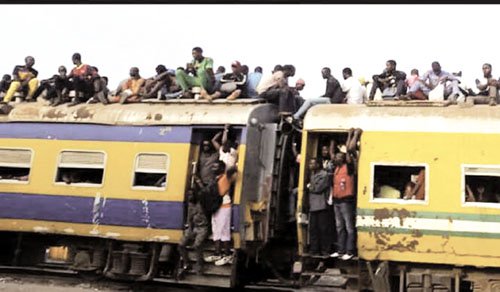 The bluish-black outstripping cumulus clouds stirred the fear of another heavy rainfall in the heart of those preparing for work. Time was 4.30 am when the reporter made for the railway station, despite the soft, seductive and alluring breeze almost drawing him back to the dream land.

As a result of the heavy rain of the previous days, the road that leads to the ticketing office of the Agege station was marshy. The nondescript structure (a portakabin), which serves as the office for the railway brimmed with hordes of beggars even that early. Some could be seen in some corners folding their sleeping mats. Mosquitoes were seen waltzing in the air, but no one seem to pay their presence any attention.

The only thing in the room that served as office for the ticket tellers were three old settees; one fully tattered; a wooden table darkened with soot and plastic chair. Not all passengers could sit inside when told to wait a little by ticketing officers. Those lucky to be inside had to give full attention to the mosquitoes who had a field day looking for where to perch to draw just a pinch of blood most mostly haggard looking people waiting for the next train.   In what was regarded as the normal practice, the ticketing officer, rang the bell to rally intending passengers to purchase tickets. Passengers trickled in to buy tickets. A ticket sold for N230 for a Mass Transit Train.

According to one of the railway officials, the train coming from Ijoko station was headed for Iddo station. She stated that there would be two trips in the early morning rush hour and later in the evening. However, she noted that afternoon trips had been cancelled temporarily.

Commuters who missed the morning trips will have to settle for public buses to their destinations and return the train station to see if they would be lucky to catch a ride home.In the meantime, everyone had bought tickets, and a blast of horn was heard from the train and several passengers started ‘the mad rush’, trooping towards the platform to board the train. Within minutes, all the 10 coaches were filled to the brim. Entry into the train, which was partially full even at this wee hour of the morning wasn’t easy.

Commuters crowded the various doors to the coaches. As a first timer, the reporter wriggled his way through one of the coaches however and scanned for possible empty seat to drop his wearied weight. He found none. That meant standing all through the journey to Mushin. The clattering metals and the jerking raises pangs of fear – what happens if one of the coaches suddenly pulls off. The reporter quickly shut out the fear. Nothing, he said, must compound his fright. The train reminds him of a bubble waiting to burst. Men, women, boys and girls in their numberwere aboard the train.

With everyone clustered up, there was no room to manoeuvre. Not even on the aisle. Before it got to Shogunle, there was no leg room again as people nestled on one another. The saving grace was iron bar at the roof which an army of hands clutched for support. It was observed that there were different groups of people on the train, those who prefer the free space atop the train (rooftop riders).The itinerant herbs peddlers, beggars going to their begging stations to eke out a living for the day, most of who are blind and are accompanied by their guides, traders and artisans living along the border towns who are rushing to their various stations for the day’s livelihood and those like the reporter having their first baptism of what the train ride feels like. The last set of people are easily spotted in the crowd, even from their dressing, which seemed out of place in the rickety contraption of the stuffy train.

Moments thereafter, the train crawled out of the station, snaking its rusty way across the rutted old track. A boisterous cacophony of noise from inside the passengers inside the coaches mingled with the loud clatter of the iron wheels to create a noisome culture which many say was the culture of the train on the route. The rooftop riders, obviously in their own world, preened and chatted idly as the train gathered speed. Also, some passengers hung in between the coaches like bees in a hive. With the train extremely over-crowded right from the outside, it was an ugly sight which gave an inkling of what to expect in the disgusting interior. An official of the Nigeria Railway Corporation, who does not want to be named, said the organisation routinely arrests hitch hikers. For him, even if you have a fundamental right to commit suicide, the corporation would not permit you to execute it within its property.He described rooftop riders as “an accident waiting to happen”, adding that many fatalities recorded during derailments were always from roof riders.

“These are people who are seconds away from disaster yet they remained undeterred.” Most rooftop riders, he according to him are hoodlums, adding that despite a N50,000 fine or prosecution slammed on anyone caught, the act persists.Bejide, a passenger who was displeased with those who nestled on the roof of the train, said: “Those guys have been warned several times, but they will not heed.

They keep endangering their lives. They jump on the train because they don’t want to pay and would rather put themselves on devil’s way.

”When this reporter asked one of the train attendants who donned a jacket labeled NRC, if he could get a place to seat in any of the other coaches, having shown him his ticket, the tetchy official fired back with contempt: “Even those who had come much earlier didn’t get a place to seat…”The train which plies the Ijoko to Iddo route has seen better days. It is only fit for the scrapyard.

As another passenger observed, the railway is a testament to the failings of a country that prides herself as “the giant of Africa.””It is a shame to think that such ramshackle contraption still exists in the country and citizens are still riding on in. The creaky coach painfully portrays the country’s glories carted off to the knacker’s yard,” the passenger said to no one in particular.

Though the atmosphere was unsavoury with stench oozing from all corners perhaps owing to the overload, most people seemingly enjoyed it. They chattered and guffawed at will. Those who didn’t take part in any conversation slept while sitting. Others plugged  in their earphones as the journey wore on.

At each station, commuters disembarked, and in the process barged into those standing, stepped on them and stained them with their dirty shoes. It continued like that as passengers alighted at Ikeja Along, Shogunle, Oshodi, Mushin. And thereafter, someone who looked well-groomed from home will now shockingly look disheveled like a spineless man who just had a wrestling bout with a madman.As the journey progressed, an elderly Muslim cleric preached to passengers. Speaking with the conviction of an orator, he not only held his ‘audience’ spellbound but dished out his message with magisterial swagger. His prayers were passionately responded to with loud “Amen.”It was like early morning tonic for adherents of the Muslim faith.

Another elderly man with petite frame advertised a herbal concoction which he claimed could cure all ailments. Clutching a black polythene bag, he had to squirm his way through to make people buy his “magical” product.

The interior of a cramped up train was not the best place to market such a product, but he had thought otherwise.

A mild drama ensued between some passengers standing. A middle-aged man raised his voice to show his displeasure to another man who had seemingly insulted him. After sometime, frayed nerves were calmed.

As the train galloped on the tracks, Yusuf, a passenger, who was delighted said: “I have always liked a train ride. For me, it is a great experience. It is cheaper when compared to commercial buses.

Apart from that, it is an avenue to make new friends. Forget the inconvenience, we always have fun here either sitting or standing. In fact, a friend once celebrated his wedding with us in the train. It is nice,” he gushed.Another passenger disagreed with him, she said: “I don’t really fancy train ride in Nigeria, perhaps due to the old and unattractive trains we have here.

For instance, we cannot compare trains in the UK and China to the ones we have here. Those ones abroad are much better and they offer pleasurable  and comfortable rides.”

A regular train user noted that he uses the train service not because of comfort or pleasure but because there is no worry of incessant traffic congestion, then it is price-friendly.

Railway, it has been observed comes across as one of the most explored form of transportation around the globe. Majority of people enjoy travelling by train for different reasons, for instance there is a chance to view different scenes that cannot be seen via cars, for some just for the fun of adventure and because it offers safety. But it is doubtful if one can enjoy a train ride especially with the regularly jampacked Lagos trains.

Meanwhile, Lagosians wait with bated breath for the actualization of the Red Line from Agbado to Marina and the spur track from Oshodi to Murtala Muhammed Airport as promised by the state government. Lagos State Governor, Mr. Babajide Sanwo-Olu had in July reiterated his desire to ensure effective, safe and reliable multi-modal transportation system that would aid unimpeded movement.Nonetheless, long after shuddering to a halt, the loud blast of the train’s horn still reverberates in the memory of this reporter.