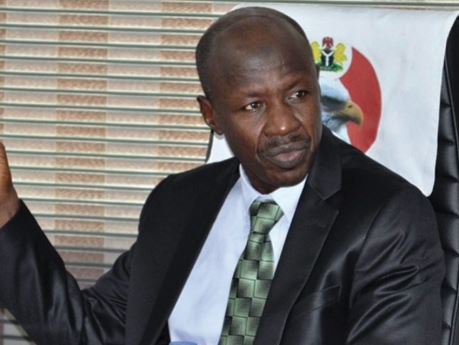 THE acting Chairman of the Economic and Financial Crimes Commission (EFCC), Ibrahim Magu, has said a former Attorney-General of the Federation and Minister of Justice, Mr. Mohammed Bello Adoke (SAN) has a case to answer over the Settlement Agreement on Malabu Oil Block (OPL 25).

He said Adoke has been offering the reading public in the account of his sojourn in governance a bouquet of half-truths and plain lies.

He said Vice President Yemi Osinbajo did not discuss, counsel, or direct him in any way on any issue concerning Adoke.

He said the EFC is not the battle axe of political figures and could not have been called out to deal with anyone as being insinuated by Adoke.

He said after satisfying his long desire to titillate the public with some tales, Adoke should make himself available for trial.

Magu, who made his position known in a statement through the Head of Media and Publicity of EFCC, Mr. Wilson Uwujaren, said the commission’s investigation had implicated Adoke in the matter of the implementation of the settlement and resolution of agreements on Oil Prospecting License OPL 245 and OPL214

He said the probe of OPL 245 was not a witch-hunt.

He said: “It is important for the public to know that the investigation of the lucrative Oil Prospecting License 245 Settlement deal, otherwise known as the Malabu Scandal, by EFCC was not an enterprise in witch-hunt or malice.

”The Magu-led leadership of the commission, in consideration of persistent public demand for closer scrutiny of the transaction, coupled with emerging information suggestive of opacity in the consummation of the deal, acted in national interest to determine that overall public good was not sacrificed on the altar of personal interest of those who perfected the deal.

“The investigation had been discreet, with no threat of direct physical harm to Adoke or any other person implicated in the deal.

“The commission’s investigation holds Adoke liable in the matter of the implementation of the settlement and resolution of agreements on Oil Prospecting License OPL 245 and OPL214 between Malabu Oil and Gas Ltd, belonging to former Petroleum Minister, Dan Etete and the Federal Government of Nigeria in 2010.”

The EFCC chairman released the details of the investigations into Malabu Oil Block scandal.

He added: “It could be recalled that former President Olusegun Obasanjo had revoked the OPL 245, which the late General Sani Abacha granted to Etete, who was his Petroleum Minister, and reassigned it Shell Nigeria Exploration and Production Company. Etete’s Malabu Oil and Gas, however, reclaimed the oil block in 2006 through the court. While Shell challenged the decision, a fraudulent settlement and resolution was perfected under former President Goodluck Jonathan’s government with Shell and Eni buying the oil block from Malabu in the sum of $1.1billion.

”EFCC’s investigations, however, revealed crimes that border on conspiracy, forgery of bank documents, bribery, corruption and money laundering to the tune of over $1.2 billon against   Malabu Oil and Gas Ltd, Shell Nigeria Ultra deep (SNUD) Nigeria Agip Exploration (NAE) and their officials. Some of those officials are already facing criminal trials in Switzerland and Italy.

“Adoke as the then Attorney General of the Federation and Minister of Justice allegedly abused his office in respect of the granting of the oil prospecting license OPL 245 to Shell and ENI.

“A prima facie case bordering on official corruption was established by the Commission, following the investigations, culminating in court charges against Adoke, Etete and others, which is still pending before the FCT High Court and the Federal High Court.”

He advised Adoke to return home for trial.

“The arraignment of Adoke SAN, Etete and others could not take place because they along with other defendants have remained at large, refusing to make themselves available for trial.

“The former chief law officer of the federation prefers to remain in self-exile, and engage the Commission in needless media war.

“Having now satisfied his long desire to titillate the public with some tales by moonlight in the mould of a semi author-biography, Adoke should now make himself available for trial,” he said.

Magu, however, faulted alleged attempts by Adoke to rewrite history.

He said: “The acting Chairman of the Economic and Financial Crimes Commission EFCC, Ibrahim Magu, is alarmed by the brazen attempt by former Attorney General of the Federation (AGF) and Minister of Justice, Mr. Mohammed Bello Adoke (SAN), to rewrite history and portray himself as victim of persecution regarding the Economic and Financial Crimes Commission (EFCC’s) investigation of the OPL 245 Settlement Agreement (Malabu).

“Specifically, he claimed in Chapter 8 of the book, that Magu was recruited by Prof. Osinbajo to hound and persecute him despite, as he claimed, his role in reinstating Magu to the EFCC from the police “where he had been vegetating.”

“Adoke attributes his source of information on the alleged Osinbajo instruction to Magu against him to an unnamed governor from the Northwest, who according to him, claimed Magu told him that he had the instruction of Osinbajo to “deal with Adoke.”

“Adoke also claims that an unnamed senator also confided in him that Magu nursed a personal grudge against him because he believed that he (Adoke) owned half of the Centenary City in Abuja.

“That Adoke neither named the Northwest governor nor the senator that provided the weighty intelligence on which he took Magu to the guillotine in his book, could only mean one thing: the claims are tissues of lies, contrived to entertain and attract underserved attention to himself.

“The acting Chairman of EFCC, Ibrahim Magu categorically states that at no time did the Vice President discuss, counsel, or direct him in any way on any issue concerning Mr. Adoke. It is wicked and evil to make such a false allegation against anybody, especially where it is based on hearsay.”

He added: “These yarns, being spewed by hirelings of the former AGF are nothing but a marketing gimmick, dubiously orchestrated to wet public appetite and sufficiently stir curiosity ahead of the official release of the book on Monday, September 16, 2019.

“But, it is obvious that what Adoke is offering the reading public in the account of his sojourn in governance is nothing but a bouquet of half-truths and plain lies.

“The accounts in Chapters 8 and 9 as it relates to the EFCC and its Chairman, Ibrahim Magu, are not only inaccurate, but self-serving.”