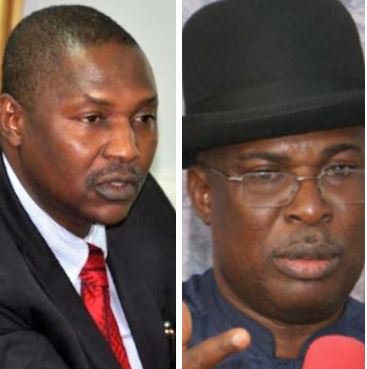 ATTORNEY-GENERAL and Minister of Justice Abubakar Malami and Minister of State Petroleum Timipre Sylva have been summoned by the House of Representatives over the $9.6 billion judgment debt against the country in the United Kingdom.

The angry lawmakers took the decision at plenary on Wednesday after deliberating on a motion of urgent national importance moved by Prof. Julius Ihonvbere.

The House observed that “this embarrassing judgment exposes a deep decay in our governance and leadership infrastructure with far-reaching implications for the credibility of the country’s capacity to handle business and legal cases.”

It mandated a 17-man ad Hoc Committee to invite the ministers and other government officials that are connected to the deal.

According to the Green Chamber, the minsters are to give report on the huge cost awarded in favour of Process and Industrial Development (P&ID) Limited, and explain the lapse in judgment of time and due diligence in the  handling of the case with a view to finding lasting solutions to the avalanche of extant and future cases.

The lawmakers are also to invite other officials of the ministries, saddled with the responsibility to negotiate the agreement with P&ID and the prosecution of the matter before the tribunal.

The committee is headed by a Katsina State All Progressives Congress (APC) lawmaker Sada Soli.

The resolution was sequel to the passage of a motion sponsored by Ihonvbere.

Ihonvbere noted that the $9.6 billion (with daily interest accruing) by a commercial court in the United Kingdom (UK) against Nigeria, “leaves a very sour taste in the mouth.”

He said for a country with a foreign reserve of only $45 billion and a sovereign debt profile of over $80 billion, the judgment debt is not only punitive but would devastatingly affect the economy.

The lawmaker said: “Aware of the fact that Nigeria has a penchant for disregarding the sanctity of contracts and terms of agreement, coupled with the failure of Nigeria’s representatives in many cases, to carefully or diligently scrutinize agreements they sign knowing that the consequences will affect past and future generations.

“Aware also that Nigeria had entered into a Gas Supply and Processing Agreement (GSPA) with P &ID Limited, in January 2010, through the Ministry of Petroleum Resources with the understanding that Nigeria would supply natural gas (wet gas) at no cost, through a government pipeline to P&ID’s production facility, while P&ID in return would construct and operate the facility, process the wet gas and return to the government of Nigeria lean gas for the generation of power at no cost to Nigeria.”

He noted that two years down the line, P&ID had not built any gas plant to which Nigeria could supply wet gas for processing, signifying in the first place that the move to Arbitration was opportunistic and grossly self-serving.

Ihonvbere said: “Cognizant of the fact that, the matter went before an Arbitration Tribunal, under the Rules of the Nigerian Arbitration and Conciliation Act 2004, with London, England as place of Arbitration.

“After affirming its jurisdiction in the matter, the Tribunal began hearing to determine whether or not there were any repudiatory breaches of contract. At this point, there was an attempt by the Ministry of Petroleum to reach a settlement agreement with P&ID Limited to the tune of $850 million, payable in installment which obviously was not diligently pursued.”

Ihonvbere expressed concern that the agreement was somewhat shrouded in secrecy and as such apparently dubiously procured, “as those who ought to know about its existence did not and more importantly, the relevant laws in Nigeria for the transaction to be consummated was not applied especially, Part IV of the Bureau of Public Procurement Act 2007 which deals with the fundamental principles of procurement.”

According to him, it was alarming “that it took the new government more than four months to respond to the vital arbitration judgement of about $9.6 billion with a ridiculous excuse that there had been a change of administration in Nigeria and that ministers, including the Attorney-General had only just been appointed thus asking for an extension of time to act on the outcome of the arbitration tribunal.”

He said it was equally alarming that, rather than engage P&ID in the matter before the tribunal with robust legal arguments and interpretations; Nigeria was busy shopping for a favourite forum to plead her case in a court in Lagos, Nigeria.

The ad hoc committee is to recommend appropriate sanctions where necessary without fear or favour or preference for status in line with Order 14 of the Standing Orders of the House.

It will also initiate a process of reviewing all agreements and treaties signed by Nigeria through the appropriate committees to create opportunities to discover anomalies and avoid a repeat in the future.