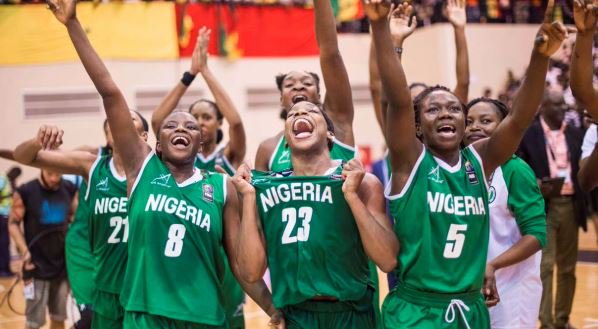 ZENITH Bank Plc on Tuesday put smiles on the faces of the victorious Nigeria Women basketball team, D’Tigress, after rewarding them with cash award during a brief reception organised for the team at the corporate headquarters of the organisation.

In the past 15 years, Zenith Bank has been the official sponsors of the Women basketball League in the country and has been at the forefront of supporting the women national team.

Speaking during the reception, the Group Managing Director/CEO of Zenith Bank, Ebenezer Onyeagwu, expressed his excitement on the feat achieved by the girls.

“I am extremely happy to receive the victorious and elegant Queens with the trophy,” he said.

“One is for you to be a champion, but another thing is to defend the title which you (D’Tigress) have done in grand style. You didn’t just do that, but you defeated your major rival right in their backyard to lift the trophy.

“This result is a source of joy to us at Zenith Bank that all our investment in the last 15 years is not in vain. To appreciate your victory, we will send a token put into individual accounts including the players, the officials and the backroom staff.”

While reacting to the reception and cash rewards given to the team, D’Tigress captain, Adaora Elonu, appreciated the bank for their support as she appealed for more support towards the Olympic Games qualifiers.

In his own words, the president of the Nigeria Basketball Federation, Musa Kida, applauded the winning mentality of the team.

He added: “What the players went through to win the trophy cannot be described in words.

“They played against a better prepared team which was the host, against over 20,000 Senegalese supporters who rooted for their team to lift the title, but they came out unscathed.

“The NBBF thanks Zenith Bank for their support of over 15 years, and I am happy you promised to continue to support the federation and also decided to use your office to bring in more sponsors so as to develop basketball more from the grassroots.”