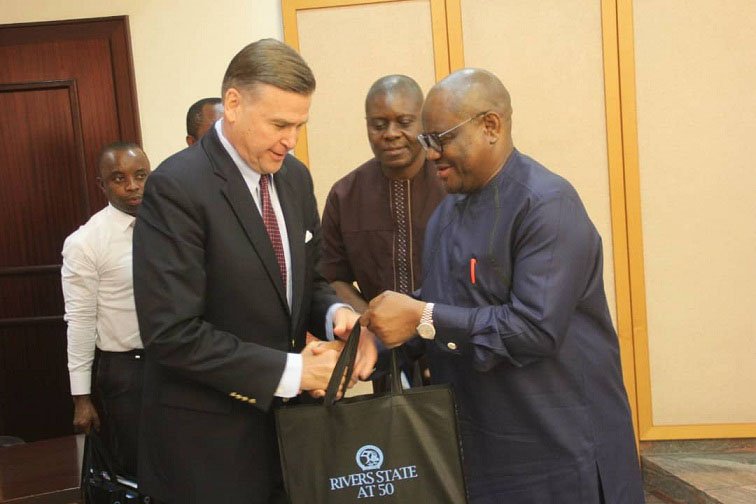 Rivers State Governor Nyesom Wike has praised the United States for working with the state to fight HIV/AIDS.

Wike spoke yesterday at the Government House in Port Harcourt during a meeting with the U.S. Ambassador to Nigeria, Stuart Symington. The meeting centred on promotion of the health of Rivers people.

Wike said: “I thank the United States for working with us to reduce the prevalence of HIV/AIDS. I thank the U.S for recognising the contributions of Rivers State in the fight against AIDS.”

The governor assured the U.S that his administration would continue to fund programmes to reduce the prevalence.

“We will continue to work for the reduction of HIV/AIDS. We are glad that we are partners with the U.S. For us, health is key. Education is key. With education, you can talk to people on measures to stop the spread of HIV/AIDS. At present, with the support of the U.S, we are running 115 sites to prevent mother-to-child transmission of HIV/AIDS.”

Symington said his country had a $75 million budget increase for HIV control activities in Nigeria, with about $25 million allocated for the ART surge activities.

He thanked Wike for announcing his intent to eliminate user-fees for PLHIV.

According to Symington, the U.S. President’s Emergency Plan for AIDS Relief (PEPFAR), administered by the U.S. Centre for Disease Control (CDC), Department of Defence, and Agency for International Development (USAID) is implementing an Anti-Retroviral Treatment (ART) surge programme in Rivers State to identify and provide treatment to approximately 180,000 PLHIV, who have not previously received such.

He said: “The United States remains committed to supporting Nigeria as it works to reduce and ultimately eliminate the scourge of HIV/AIDS among its people.”