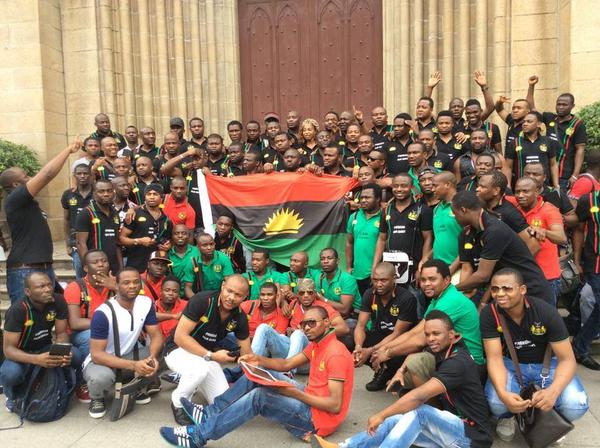 The Senator was attacked in Nuremberg, Germany where he was attending the New Yam Festival of Igbo Community in that country by suspected members of the outlawed group

The videos of the attack, posted by some members of the pro-biafra group who allegedly carried out the attack, have since gone viral.

Reacting to the attack, IPOB said it has ordered its members in 100 countries across the world to attack Igbo leaders anytime they see them in any part of the world

It listed other leaders marked for such attacks to include Governors David Umahi of Ebonyi, Ifeanyi Ugwuanyi of Enugu, Okezie Ikpeazu of Abia and Willie Obiano of Anambra state.

The group also put on notice Ndigbo leaders such as the President-General of the Ohanaeze Ndigbo, Nnia Nwodo, who it accused of supporting the Operation Python Dance in the South-East.

Operation Python Dance was launched by the Nigerian Army in the South-East in 2016 in the wake of protests by IPOB members who were demanding secession from the country.

During the Operation Python Dance, the army raided Umuahia, Abia State, the home town of the leader of the secessionist group, Nnamdi Kanu.

The Federal Government designated IPOB as a terrorist organisation on September 18, 2017 under the Terrorism (Prevention) Act 2013.

IPOB spokesperson, Mr Emma Powerful in a statement, noted that South-East governors and some Ndigbo leaders have been marked as enemies to be attacked if they were seen in any of the 100 countries their members were residing.

He said the directive was given by IPOB leader and the attack on Mr Ekweremadu, in Nuremberg, Germany on Saturday was in obedience to the order.

The statement reads: Yesterday, being the 17th day of August 2019 the Nuremberg IPOB family in Germany in keeping with the long standing directive from our leader to hound all instigators of Operation Python Dance, IPOB is glad to report that Ike Ekweremadu was confronted and duly hounded out of a so-called New Yam Festival event in Germany.

“Despite repeated warnings to the organisers of these jamborees that Enugu, Ebonyi and other parts of Biafraland is under siege by Fulani caliphate and their collaborators within, they went ahead to invite a known traitor, co-conspirator and one of those that worked with Igbo governors to proscribe and tag IPOB a terror organisation while they never raised any voice against murderous Fulani herdsmen.

“This should serve as a warning to Nnia Nwodo, Dave Umahi, Okezie Ikpeazu, Willie Obiano and co that any day we find them in a public event abroad, they will be humiliated. IPOB is strategically located in over 100 countries around the world. Anywhere we find them, they will be dealt with,” Powerful said.