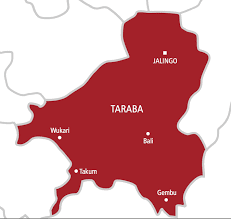 THE crisis between Tiv and Jukun ethnic groups in Wukari local government area of Taraba State has taken a different dimension.

Two students and a non-academic staff of the Federal University Wukari were abducted and killed on Thursday.

“They were abducted at Kasuwan Shanu, near Chonku,” he said.  The authorities of the university has closed down the institution following the incident.

The Vice-Chancellor of the university, Prof. Abubakar Kundiri, told reporters that the slain students and staff, being Tiv, sparked off protest by Tiv students, which was joined by other students.

Kundiri said the abductors had used the mobile phone of the non-academic staff to demand for ransom from the university’s management.

The protesting students demanded for the bodies of the slain persons and relocation of the university. Tension was high, it was learnt.

A Committee of Deans and Directors, on behalf of the university Senate, approved the suspension of lectures and closure of the institution till further notice. The committee asked the students to vacate the premises of university.

The vice chancellor said security has been beefed up by the army and police to ensure the safe exit of students and staff from Wukari.

Jukun and Tiv ethnic group have been at war for more than five months.

The killings have increased tension between the two states as Benue State government yesterday evacuated over 812 students from the university.

A witness, Jerry Lorgaen, told The Nation on phone that the students went out to buy provision before they were ambushed and killed by suspected Jukun militia group.

The President of the National Association of Benue State Students, Tyonor Smith, identified those killed as Msughter Vihior Andura (a Micro Biology, 100 level student) and Mark Tsav (a non-academic staff).

The Community of Tiv Students (CTS) on Wednesday  protested the gruesome murder.

They called on the university’s management to close down the institution or to give the Tiv students transport fare to leave the school.

But, the Benue State Commissioner of Education, Prof. Dennis Ityavyar explained that the evacuation of Tiv students became necessary following the attack on Benue State students in the institution by suspected Jukun militia group.

Ityavyar said buses were dispatched to bring the students home.

He stated that the buses were accompanied by a detachment of troops of Operation Whirl Stroke, adding that the students would be dropped in designated points, including Katsina-Ala, Ugbema in Buruku Local Government Area as well as Makurdi, the state capital.

“As a government, we are concerned about the security of our citizens. That is why the Deputy Governor Benson Abounu appealed to security operatives in Taraba to ensure the safety of the students,” he said.

Hundreds of lives have been lost and properties, including foodstuffs, estimated at billions of naira , have been destroyed since the crisis started in Kente village on April 1.

Since then, guns have continued to boom, with machetes slashing as death tolls rise daily. Homes are also being razed and plundered.

Yet travellers are sometimes fetched from vehicles on the highway and massacred.

Thousands in Wukari have fled their homes, which have come under attack as a result of the crisis, turning Wukari into a ghost town.

The university had been in operation amidst fear.

The Tiv-Jukun crisis is one of the protracted inter-ethnic feuds in the country, reverberating in intervals of 10 and 20 years.

It was gathered that the major cause of the Jukun/Tiv conflict is the claim by Jukuns that the Tiv are “settlers” and not indigenes in Wukari, and that they have no ownership right to the land they occupy.

The Tiv, on the other hand, use the longevity of their stay in Wukari to repel their settler status by claiming both land ownership and political rights in the area.

Governor Darius Ishaku on Tuesday clocked 65 years, but there was no special event to mark the anniversary.

He said he devoted the day to prayers, because of the killings. Many had thought Tiv and Jukun will enjoy the best of their interaction , owing to the fact that Governor Ishaku is Jukun but married to Tiv.

But the situation is, however, different.