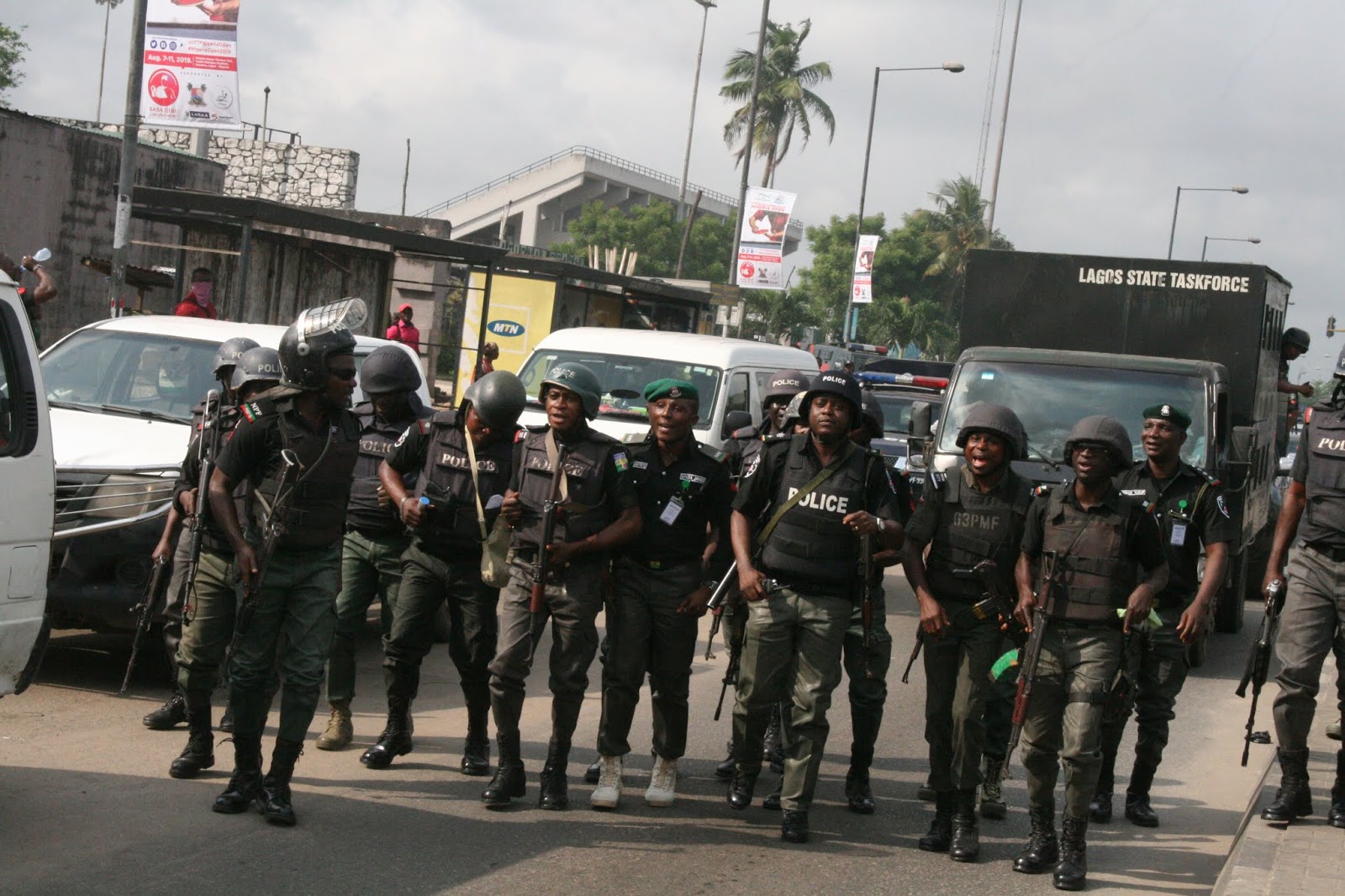 SECURITY agencies on Monday foiled the #RevolutionNow protests in many states.

In Port Harcourt, the Rivers State capital, security agents defied a downpour to man strategic places in the capital city, especially the Isaac Boro Park, near the State House.

Governor Nyesom Wike on Sunday warned against the protest, directing security operatives to foil it and arrest participants.

There was no gathering of any kind and business activities went on as usual in the state.

As early as 6 a.m., policemen took over the main gate of the Isaac Boro Park in Mile One, Diobu, Port Harcourt, the usual take-off point for most protests in Rivers.

Shortly after the policemen’s arrival, the downpour started, forcing them to move into the six Toyota Hilux patrol vans parked under the flyover, directly opposite the park. The heavy rain was still on, as at press time.

In Benin City, the Edo State capital, and other towns, there were no protests. The Oba Ovoranmen Square, the city centre that served as a rallying point for previous protests, was empty.

Residents went about their daily activities. A news conference scheduled by some activists in the state was called off after a call from Abuja. Security was beefed up around Benin City and major streets.

In Ondo, the protest also failed. Business and social activities went on smoothly in Akure, the state capital. Security agents were deployed to strategic areas of the Akure metropolis.

At the M.K.O Abiola Democracy Park, close to the main market, Oja Oba, officers of the Nigeria Security and Civil Defence Corps (NSCDC) and some plain-clothed men took charge.

“It is the right of every individual citizen to protest, but the manner and the lexicon they (organisers) are using ‘revolution’ depicts forceful takeover of a legitimate government in power. No security agencies would allow that to any groups to attempt to overthrow the government. A forceful takeover is no longer fashionable all over the world. No country would allow that.

“The only means of change now is through the ballot. That’s why the proposed protest was condemned by many Nigerians. That’s why we are going to resist any vestiges of revolution.

“We are on the ground and ready. We are not leaving anything to chance because Omoyele Sowore is from this state and surely he would have some of his supporters here. We would not allow that in our state.

“This is not acceptable. It is tantamount to treason and we all know the consequences. They should dissipate their energy on better things. They should not make any attempt in Ondo State because we will deal with them decisively though within the ambit of the law.”

There was a poor response to the call for protest in the Southeast.

The Director-General of the Voice of Nigeria and chieftain of the All Progressives Congress (APC), Osita Okechukwu, attributed the poor response in Enugu to the Igbo quest for president in 2023.

Okechukwu spoke with reporters shortly after a meeting with Wawa Farmers Association in Enugu.

He described the call for nationwide protest by Global Coalition for Security and Democracy (GCSD) led by Omoyele Sowore as unpatriotic.

“Methinks our people are aware that 2023 is the date we are waiting to elect Nigeria president of Igbo extraction. That’s why they didn’t participate in the protest. All one hears from the people one discussed within the meeting with WAWA Farmers Association was their anger over incessant killings like that of Rev. Fr. Paul Offu.

“Instead of protest, they are urging Mr President to overhaul the security architecture and upgrade the security infrastructure. They cried that insecurity is hampering their farming activities,” Okechukwu said.

All quiet in Kano

The protest did not hold in the ancient city of Kano. Business and commercial activities went on as usual.

Many residents were not even aware of the planned protest. Security men were drafted to beef up security at strategic flashpoints of Kano metropolis.

Also, several police vans, including that of the armed, patrolled major streets in Kano.

The spokesman of the Kano State Police Command, DSP Abdullahi Haruna, told this reporter that the Commissioner of Police Ahmed Iliyasu ordered policemen across the state to be on red alert.

He said: “As I am talking to you, as you can also observe, Kano is peaceful, our men have been drafted to strategic areas to monitor the situation.”

The police on Monday brutalised a 70-year-old poor woman, Sariyu Akanmi, during the protest in Osogbo, the Osun State capital.

She was hawking fufu where the protest was going on. The police hit her with the butt of their gun, kicking her on the floor while trying to throw her inside their van. But the intervention of some people around prevented them from arresting the woman.

The police also arrested ten of the protesters. Tear gas canisters were thrown at reporters covering the protest.

Men of the State Security Service and the Police prevented members of the Coalition for Revolution in Osun State from protesting against alleged suffering of Nigerians under the Mohammad Buhari administration.

The protesters, mainly students of the Obafemi Awolowo University, the Federal Polytechnic, Ede, the Osun State Polytechnic, Iree and other public tertiary institutions in the state, gathered at Olaiya junction in Osogbo, the state capital around 9.00 am to sensitise Nigerians about the “deplorable conditions prevalent in the country under the watch of the President Buhari.”

The protesters called for a revolution to stem the tide of a spate of joblessness, insecurity, hunger, modulated workers salary and “fraudulent implication of the Contributory Pension Scheme in Nigeria.”

For hours, security agents, including the SSS, the police and the Nigeria Security and Civil Defence Corps kept the students under watch and did not allow them to move out of Olaiya junction.

Some of the students, who used the Public Address System to speak to passers-by, demanded the unconditional release of Omoyele Sowore, the convener of the Revolution Now movement.

There was no protest in Kogi State. Aside from the early morning rain, normal business activities resumed around the capital, Lokoja. People went about their daily chores.

Many residents were unaware of the call for the protest march by the NigeriaRevolutionNow group. There was no unusual deployment of security agents.

Anambra State police command deployed over 50 patrol teams in the state. They moved around the state.  There was no protest in the state. Police Public Relations Officer (PPRO) Haruna Mohammed said the Command was ready for anybody or group that would try to disturb the peace in the state.

Commissioner of Police John Abang directed the deployment of policemen both in plain clothes and uniform to patrol all the roads in the state.

Mohammed said: “The state is not involved in the protest, but what the Command has done is to take proactive measure in case of any disturbances from some miscreants.

“Anambra has been a quiet place and the Command will like it to remain so. But if anyone tries to be smart, the person will face the wrath of the command.”

Some heavily armed men of the Kwara State command yesterday stormed the state’s stadium complex to disperse athletes on training.

The police were ordered to block the stadium gate over speculation that the facility would be used for the pro-revolution rally.

Police spokesperson Ajayi Okasanmi said the presence of policemen at the stadium was a proactive measure put in place by the police command to prevent chaos.

Okasanmi said: “Kwara State is largely recognised as a state of harmony and Ilorin is reputed to be peaceful. We owe our law-abiding people the duty to sustain that. More so, we had to prevent the planned protest from being hijacked by hoodlums in order not to lead to any dangerous dimension.”

Its convener, Josephine Okpara, demanded the expulsion of Amnesty International (AI), and not revolution.

They accused the pro-revolution group of acting against the interest of Nigeria and Nigerians “under the active support of some external forces that are bent on destabilising the country.