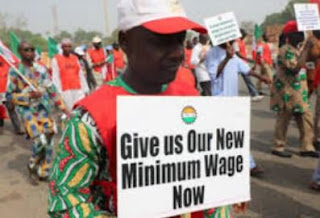 WHAT is delaying the implementation of the “Consequential Adjustment” of the N30, 000 new minimum wage?

The Chairman of the National Salaries, Income and Wages Commission (NSIWC) Chairman, Chief Richard Egbule, blames it on the unrealistic demands by Labour unions.

But Josiah Biobelemoye, a member of the Joint National Public Negotiating Council on the adjustment, accused the government of stalling the process.

Explaining why the Federal Government cannot accede to Labour’s request, the NSIWC boss said the workers’ demand would push the total wage bill too high.

He said: “Labour is asking for consequential adjustment and government in its wisdom had made budgetary provision for an adjustment of N10, 000 across board for those already earning above N30, 000 per month.

“However, the Unions have refused this offer, saying that because the increase in minimum wage from 18,000 to N30, 000 was 66 per cent, therefore they want 66 per cent increment across board.

“We told them that the minimum wage was not raised from N18, 000 to N30, 000 through percentage increase but as a result of consideration of economic factors including ability to pay.

“However, we said that if they want consequential adjustments in percentage terms, we will use a percentage that when applied will not exceed what has been provided for in the budget.

“The computation based on percentage which government had given to labour, was 9.5 per cent from level seven to 14 including level 1-6 of those salary structures that did not benefit from the minimum wage.

Egbule said that at the last meeting between the Federal Government and the Labour unions, the government proposed a 10 per cent increment for level seven to 14 and a 5.5 per cent increase for level 15 to 17.

He urged Labour to come to a compromise because government had so far been magnanimous in agreeing to increase salaries without any threat of downsizing.

Egbule said: “Labour is currently stretching out and eating up the time that people could have used in benefiting from the adjustment because the new minimum wage was implemented since April.

“The committee has already been formed and awaiting inauguration. I want them (Labour) to know this and liberate us from this unnecessary log jam.”

Egbule reiterated the commission’s commitment to giving sound advice to the government on the portion of national income that should be devoted to the payment of salaries and wages.

Biobelemoye, who is the National President of Medical and Health Workers Union (MHWU) and National Chairman of the Joint Health Sector Unions (JOHESU), said what the government was offering as consequential adjustment for workers from levels 07 to 14 and those on levels 15 to 17 was ridiculous.

According to him, the N10, 000 which the government claimed to have included in the budget was done without consultation with union leaders, pointing out that the figure was not cast on stone as a supplementary budget can be made to accommodate the demand of workers.

He further said that between 2011 and 2017, there was no salary adjustment, hence the fact that the demand of workers or consequential adjustment right now cannot be met by the government, adding that with the cordial relationship between the executive and legislature, it will be easy to pass a supplementary budget to accommodate workers demand.

He wondered why the government team would rush to the media to accuse Labour of delaying the conclusion of negotiation, stressing that it was not the intention of the workers representatives to delay the entire process.

Biobelemoye said: “The difference between the N18, 000 and the new minimum wage of N30,000 is 66.6 per cent. But we have been considerate and asked for a 30 percent consequential adjustment for levels 07 to 14 and 25 percent for level 15 to 17. But the government is offering 9.5 per cent and 5 percent respectively and that is ridiculous.

“What that means is that while we are asking the government to add about N85, 000 to the salary of a director who is the highest paid civil servant earning about N400, 000, the government is wants to add just N22, 000 to him and that is not good enough.

“What we are saying is that the government should do the right thing. They are lying to the President that there is no money to implement the new wages and they are the same persons proposing salary of N140, 000 for workers in other sectors. What justice is that?

“However, we are having a meeting of the Joint Public Service Negotiating Council with the Government team on Wednesday and so, I don’t understand why they had to rush to the media. Since they have done that, we can as well tell the whole world our position”.

He said: “Some board chairmen are in the habit of pushing the chief executives to pay what is not appropriate or authorised by government.”

Egbule claimed that some government furniture allowance yearly. Such allowance, he noted, ought to be paid once every four years.

“Also, you won’t believe that staff schools which are the concern of universities and tertiary institutions have also been abused.

“These universities establish primary and secondary schools, collect school fees from pupils, but place their teachers as staff of the universities that the government pays.

“In fact in many of them, teachers collect salaries as much as a professor. So, all these things we discovered and put a stop to it.”
AfricaNewsNigeria