Real Madrid To Send Rodriguez To Napoli On Loan 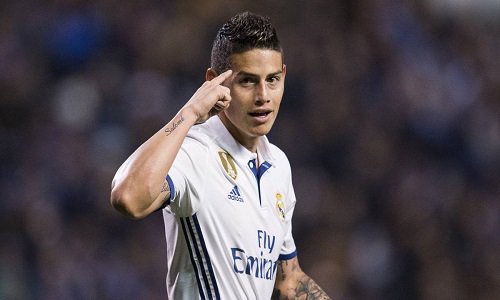 Real Madrid are willing to send outcast midfielder James Rodriguez to Napoli on loan if they cannot sort a permanent exit by August 15, according to reports.

Having spent the last two seasons on loan at Bayern Munich, Real are now keen to see a return on their £63million investment they made five years ago after he impressed at the 2014 World Cup.

Both La Repubblica and Corriere dello Sport report that while a 42m euros (£38m) sale is preferred, an agreement is in place for Napoli to take Rodriguez on loan if no exit has been agreed by mid-August.

A move to Napoli would see Rodriguez reunite with boss Carlo Ancelotti – who he worked with at both Real and Bayern.

And the Spanish giants are reportedly ready to tell the Neapolitan side that they can take him on loan with option to buy if a more profitable deal has not been struck.

Napoli President Aurelio De Laurentiis would not agree to pay his transfer fee outright due to the player’s struggling form in recent years.