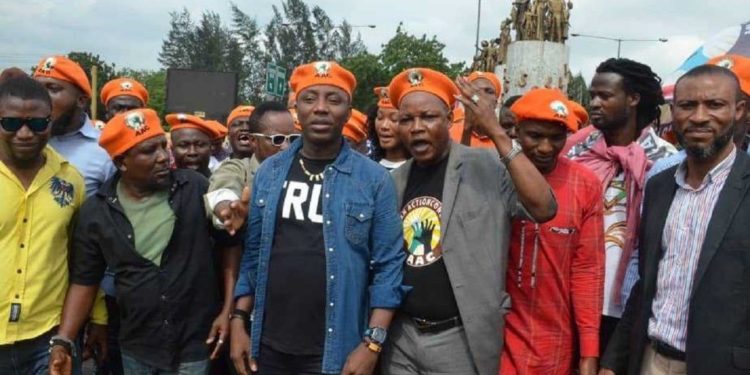 What is treason?  That was the question on Sunday as the Presidency and the Directorate of State Services (DSS) spoke on the planned “#RevolutionNow” protests billed to begin today in 21 cities.

Nobel laureate Prof. Wole Soyinka said nothing in the plan of Omoyele Sowore, the leader of the protests, suggested that he planned a forceful takeover of the government.

To him, expressions, such as “treason”, “arnarchist” and “public incitment”, are alarmist.

The reasons given for Sowore’s arrest, said Soyinka, are “untenable”.

The protests’ planners were yesterday warned that nothing of such would be allowed anywhere in the country.

Flashing the yellow card, Department of State Services (DSS) spokesman Peter Afunanya also confirmed that the arrowhead of the #RevolutionNow and presidential candidate of the African Action Congress (AAC) Sowore is in the agency’s custody.

The DSS spoke even as the Presidency yesterday cautioned the protesters that a revolution cannot be the best option of changing a government.

It reminded them that elections remain the most appropriate option to change a government in a democratic setting.

Reacting to the scheduled “revolution” march scheduled for today, the Presidency, in a statement by the Senior Special Assistant on Media and Publicity, Malam Garba Shehu, warned the Global Coalition for Security and Democracy in Nigeria to weigh the consequences of its actions.

The statement reads: “Following calls circulating on social and digital media, an organisation that calls itself the ‘Global Coalition for Security and Democracy in Nigeria’ plans a ‘revolution’ march tomorrow, Monday 5th August, with the aim of bringing ‘regime change’ in Nigeria without recourse to a nationwide vote.

“The President of Nigeria and his administration respect and uphold the right of every Nigerian to peaceful protest and civil campaign– whether to raise awareness on issues, and even oppose the government. It is the inalienable right of all citizens of the Federal Republic of Nigeria to do so.

“There is, however, a difference between peaceful call to protest and incitement for a revolution.

“The organisation championing this planned action is not fronted by any serious public faces. We call on the sponsors and organisers to have the decency to come forward and make their identity known – out of respect to all Nigerians – so that Nigerians can be fully aware in whose name this ‘revolution’ is being proposed and who the beneficiaries may be.’

According to the statement the presidential and National Assembly elections that were held simultaneously on February 23 were won by President Muhammadu Buhari and his All Progressives Congress (APC).

The statement added that the campaign was observed while results were confirmed by international election monitoring groups and observers.

Shehu said: “The result was even contested by the losing presidential candidate and his party in court. The ballot box is the only constitutional means of changing government and a president in Nigeria. The days of coups and revolutions are over.

“Those making the ‘revolution’ call hide behind the veil of social media modernity. But without revealing the identity of their sponsors, this shadowy campaign is no better, and no more democratic than the days of old.

“The President calls on all those who seek to use and hide behind everyday citizens to attain power through undemocratic and violent means, which has been alluded, to come out clearly and be identified.

“They should lead their march in person. Only then will they begin to have the right to call themselves leaders before the people of Nigeria.”

Also on Sunday, the DSS said through a statement signed by Dr. Afunanya:  ”He (Sowore) is with us because he has crossed the line, he has threatened public safety; Sowore has, as a matter of fact threatened the peaceful coexistence, social harmony of Nigeria and there is apprehension, there is anxiety, citizens are worried as to what would happen next.

The DSS spokesman declined to disclose where Sowore was being held or when he would be arraigned in court, but he stressed that there was enough justification for keeping him in custody.

“In the last few hours, I have been inundated with messages and calls inquiring whether or not Omoyele Sowore is with us,” Afunanya told reporters on Sunday at the Abuja headquarters of the DSS, shortly before making it clear that the “DSS is not ready to disclose where the online newspaper publisher is being kept or when he would be arraigned in court.”

Afunanya, who emphasized that the DSS was convinced that Sowore was working in tandem with some undisclosed foreign interests, also expressed the DSS’ confidence that the planned demonstration will not take place today.

He said: “The DSS is a responsible security and intelligence agency; it adheres strictly to the fundamental principles and tenets of democracy; it is statutorily charged with responsibilities for the detection and prevention of cries and threats against the internal security of Nigeria.

“More importantly, the Service is also charged with the responsibility of managing, containing and eliminating threats against the national security of Nigeria and these include threats of sabotage, subversion, terrorism and, of course , threats of espionage, including ethnic and separatist agitations, economic sabotage and so on.

“If we are operating as a responsible organisation and someone is calling for a revolution in Nigeria, what is a revolution? It is primarily a revolt, it means insurrection, insurgency, it means forceful takeover of government.

“Nigeria operates a democratic system; it is not a banana republic and cannot suddenly be made into one.

“Nigeria is respected in the comity of nations, it is the pride of Africa. The DSS will not sit by and watch someone and his cohorts threaten the peace and constitutionalism. As to whether Sowore is wth us or not, the answer is in the affirmative – Sowore is with us.”

Afunanya said the demonstration being planned by Sowore’s associates and scheduled for today would not be allowed.

“We want to use this opportunity to assure law-abiding Nigerians, friends of Nigeria and people of the world that come tomorrow, 5th of August, 2019, there‘ll be absolute peace in Nigeria and nothing would happen, there won’t be any revolution.

“The government that has been elected democratically will remain in place, there will not be any forceful takeover of government and the DSS will not stand by and watch self-serving people take the laws into their hands

“We will do all that is within the law to discharge our responsibilities and ensure that there is peace in Nigeria tomorrow,” Afunanya said.

He said that anyone in pursuit of power who lost an election ought to wait for another election rather than take steps that could run into conflict with DSS’ statutory responsibilities of preserving peace and order.

He also said that DSS believes that Sowore is determined to carry out his threats for sabotaging government and governance in Nigeria, using some foreign collaborators.

“We are aware that he is also working with some persons outside Nigeria to cause disaffection, chaos and anarchy in the country and we will not stand by and watch that happen”, Afunanya said.