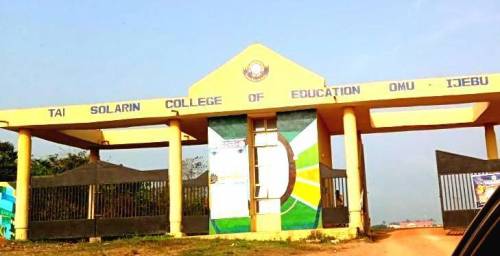 THE visitation panel set up by the Ogun State government to look into issues surrounding crisis at the Tai Solarin College of Education, Omu-Ijebu, has recommended an urgent and full implementation of recommendations of the 2016 staff audit report as some of the issues confronting the institution had been resolved by the report.

The chairman of the panel, Prof. Kamaldeen Balogun, stated this when the panel submitted its reports and 33 recommendations to the state governor, Prince Dapo Abiodun, in his office at Oke-Mosan, Abeokuta.

Balogun, who described the situation at the institution as “complete mess”, said the audit report had dealt with the case of those who disturbed the peace of the school and had recommended that eight people should be investigated as a result of their involvement in many atrocities against the institution.

The panel, according to the chairman, also recommended that for “peace to reign in the campus of the college, activities of Coalition of Tai Solarin College of Education Staff (COTAS), which is an unregistered and unrecognised association, be stopped, while the ban on activities of recognised unions be lifted.”

He said it was imperative for the state government to reopen the institution in order not to lose it license and accreditation while its governing council should be reconstituted to avoid the state of anarchy and further damage.

While thanking the state government for giving members of the panel the opportunity to serve the state, Balogun urged government to endeavour to pay three months salary to the staff, adding that the five recommendations were the immediate solutions to the problems and the rest for short and long time solutions.

Receiving the report, the governor said government could not afford toying with the college as doing so would mean playing with the future of our youths of the state who crave for quality education.

Abiodun commended members of the panel for demonstrating a high degree of commitment, responsibility and patriotism by completing their assignment a week ahead.