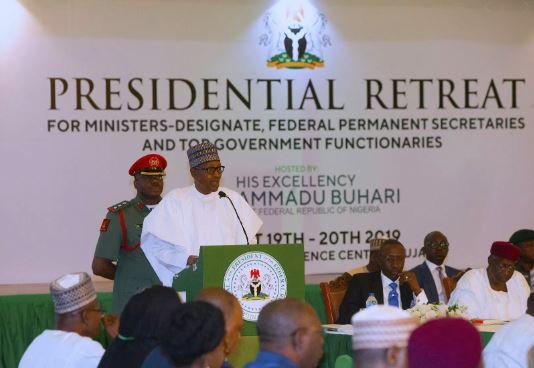 ALL eyes are on you, President Muhammadu Buhari on Tuesday told the ministers-designate. He reminded them that Nigerians expect quick results from his administration.

He spoke at the end of the two-day Presidential Retreat organised for the ministers-in-waiting ahead of their inauguration today.

The President noted that majority of under-privileged Nigerians hope for a better future.

According to him, it was the responsibility of the government to meet the great needs of the people.

Buhari said: “After two days, we have come to the end of a successful retreat. However, you will agree that our work is just beginning.

“These last two days have been very instructive for me personally, because I have had the opportunity to know many of the ministers-designate better. I was also pleased to see that you have all equally enjoyed debating and deliberating on the various challenges before us over the next four years.

“Majority of our people are poor and anxiously hoping for a better life. A Nigeria in which they do not have to worry about what they will eat, where they will live or if they can afford to pay for their children’s education or healthcare.

“Our responsibility as leaders of this great country is to meet these basic needs for our people. As I mentioned on Tuesday, this administration inherited many challenges from our predecessors.”

He listed the challenges faced at the inception of his regime in 2015 as the 18 local governments in the Northeast under Boko Haram control; decayed infrastructure; a rent-seeking economy that depended largely on oil revenues and imports; significant unpaid pensions, subsidy debts and legacy contractor debts.

According to him, his administration in the past four years laid the foundation to rebuild Nigeria.

The Secretary to the Government of the Federation (SGF), Boss Mustapha said that the incoming ministers will be responsible for the implemention of agreed initiatives and that a monitoring evaluation framework will be put in place to check their performance.

He said: “We have spent the past two days agreeing to and prioritising the key strategic initiatives required to drive accelerated economic growth in our country as well as the critical enablers required for seamless execution.

“We have also agreed on the appropriate Key Performance Indicators (KPls) and measures of success for each initiative. Some of the agreements from our deliberations include to consolidate and accelerate on the agricultural agenda to achieve full food sufficiency Increase revenue, implement measures to reduce leakages and drive cost optimization; ensure effective coordination between monetary and fiscal policy.