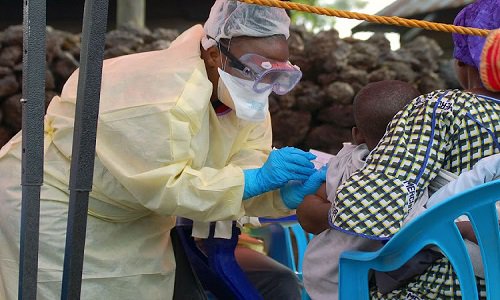 A trial of two drugs has shown that Ebola may soon be a preventable and treatable disease. The trial showed significantly improved survival rates, scientists have said.

Four drugs were trialled on patients in the Democratic Republic of Congo, where there is a major outbreak of the virus.

More than 90% of infected people can survive if treated early with the most effective drugs, the research showed.

The drugs will now be used to treat all patients with the disease in DR Congo, according to health officials.

Yesterday, two people cured of Ebola using the experimental drugs were released from a treatment centre in Goma, eastern DR Congo, and reunited with their families.

The US National Institute of Allergy and Infectious Diseases (NIAID), which co-sponsored the trial, said the results are “very good news” for the fight against Ebola.

The drugs, named REGN-EB3 and mAb114, work by attacking the Ebola virus with antibodies, neutralising its impact on human cells.

They are the “first drugs that, in a scientifically sound study, have clearly shown a significant diminution in mortality” for Ebola patients, said Dr Anthony Fauci, director of NIAID.

REGN-EB3 and mAb114 were developed, using antibodies harvested from survivors of Ebola, which has killed more than 1,800 people in DR Congo in the past year.

Two other treatments, called ZMapp and Remdesivir, have been dropped from trials as they were found to be less effective.

The trial, conducted by an international research group co-ordinated by the World Health Organization (WHO), began in November last year.

Since then, four experimental drugs have been tested on around 700 patients, with the preliminary results from the first 499 now known.

Of the patients given the two more effective drugs, 29 per cent on REGN-EB3 and 34 per cent on mAb114 died, NIAID said.

In contrast, 49% on ZMapp and 53 per cent on Remdesivir died in the study, the agency said.

The survival rate among patients with low levels of the virus in their blood was as high as 94 per cent when they were given REGN-EB3, and 89% when on mAb114, the agency said.

The findings mean health authorities can “stress to people that more than 90 per cent of people survive”, if they are treated early, said Sabue Mulangu, an infectious-disease researcher who worked on the trial.

Hailing the success of the study, Jeremy Farrar, director of the Wellcome Trust global health charity, said the treatments would “undoubtedly save lives”.

The findings, Mr Farrar said, indicate scientists are getting closer to turning Ebola into a “preventable and treatable” disease.

“We won’t ever get rid of Ebola but we should be able to stop these outbreaks from turning into major national and regional epidemics,” he added.

A sense that Ebola is incurable, paired with widespread mistrust of medical workers in the DR Congo, has hampered efforts to stop the spread of the disease.

It is hoped that the effectiveness of the drugs, made by US-based pharmaceutical firms, will make patients feel “more comfortable about seeking care early”, said Dr Fauci.

But the best way to end the outbreak, he added, is “with a good vaccine”. A vaccine is a type of medicine that improves immunity to a particular disease, as a preventative measure.

The World Health Organisation (WHO) says vaccines developed to protect against Ebola, which are allowed for “compassionate use” before official licensing, have proven highly effective.

The current outbreak in eastern DR Congo began in August last year and is the biggest of the 10 to hit the country since 1976, when the virus was first discovered.

In July, the WHO declared the Ebola crisis in the country a “public health emergency of international concern”.

But it is dwarfed by the West African epidemic of 2014-16, which affected 28,616 people, mainly in Guinea, Liberia and Sierra Leone. About 11,310 people died in what was the largest outbreak of the virus ever recorded.

However, attempts to contain the latest outbreak are proving difficult. In particular, militia group violence and suspicion towards foreign medical assistance have hindered efforts.

Earlier this month, three Congolese doctors were arrested in DR Congo over the killing of a WHO medic.

About 200 health facilities have been attacked in the country this year, causing disruption to vaccinations and treatments. In one incident, family members assaulted health workers who were overseeing the burial of their relative.

A 2018 study published in the Lancet medical journal says “belief in misinformation was widespread” concerning the Ebola outbreak. 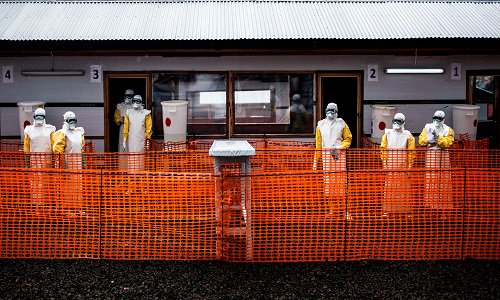 The treatments are now going to be offered to all patients in the Democratic Republic of Congo (DRC), according to U.S. National Institute of Allergy and Infectious Diseases.

They showed “clearly better” results in patients in a trial of four potential treatments being conducted during the world’s second largest Ebola outbreak in history, now entering its second year in DRC.

The drugs improved survival rates from the disease more than two other treatments being tested – ZMapp, made by Mapp Biopharmaceutical, and Remdesivir, made by Gilead Sciences – and those products will be now dropped, said Anthony Fauci, one of the researchers co-leading the trial.

Fauci, director of the U.S. National Institute of Allergy and Infectious Diseases, told reporters in a telebriefing the results were “very good news” for the fight against Ebola.

“What this means is that we do now have what look like (two) treatments for a disease for which not long ago we really had no approach at all,” he said.

The agency said of the patients who were brought into treatment centres with low levels of virus detected in their blood, 94 per cent who got REGN-EB3 and 89 per cent on mAb114 survived.

In comparison, two-third of the patients who got remdesivir and nearly three-fourth on ZMapp survived.

Mike Ryan, head of the WHO’s emergencies programme, said the trial’s positive findings were encouraging, but would not be enough on their own to bring the epidemic to an end.

“The news today is fantastic. It gives us a new tool in our toolbox against Ebola, but it will not in itself stop Ebola,” he told reporters.

Jeremy Farrar, director of the Wellcome Trust global health charity, also hailed the success of the trial’s findings, saying they would “undoubtedly save lives”.

“The more we learn about these two treatments, the closer we can get to turning Ebola from a terrifying disease to one that is preventable and treatable,” he said in a statement.

“We won’t ever get rid of Ebola but we should be able to stop these outbreaks from turning into major national and regional epidemics.”

Some 681 patients at four separate treatment centres in Congo have already been enrolled in the Congo treatment clinical trial, Fauci said. The study aims to enrol a total of 725.

The decision to drop two of the trial drugs was based on data from almost 500 patients, he said, which showed that those who got REGN-EB3 or mAb114 “had a greater chance of survival compared to those participants in the other two arms”.
Next Post Previous Post
No Comment
Add Comment
comment url
Health