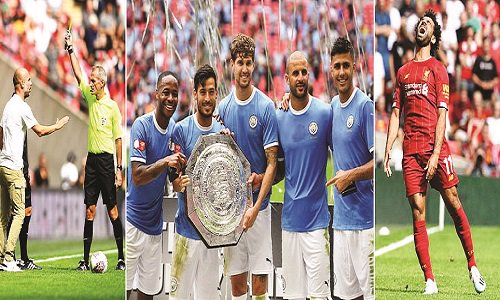 Liverpool did what they have been doing for the last 12 months: throwing everything at the side one of their former executives described a few months as ‘a machine.’

They created most of the chances, were denied a goal by the bounce of a ball, paraded the game’s outstanding player in Mohamed Salah.

And yet still they lost by the last kick of the ball, in a penalty shoot-out during which one missed kick, by Georgino Wijnaldum, was enough to deny them the victory. Gabriel Jesus found the composure to make it five converted penalties from five.

The outcome was a reminder, if they really needed it, that Liverpool are the ones with all the running to do in the nine months which lie ahead.

Jurgen Klopp was one the one who headed out with his familiar battle armour on.

For an hour or more, it had the makings of a very familiar script. Liverpool trailed to a side against whom the faintest flaw remains treacherous.

Joe Gomez and Trent Alexander-Arnold had allowed David Silva to occupy space between them in the game’s 12th minute and navigate a Kyle Walker free-kick into the path of Raheem Sterling who poked home.

Alisson, short of match-readiness after his work for Brazil in the Copa America, would have expected to do better than allowing the ball to creep trough his legs and then escape his grasp.

City proceeded to thread the ball around with a sense of security that was enhanced by the arrival of their new record signing Rodri at the back of midfield.

The Spaniard slotted in immediately, looking a more elegant, mobile, version of Fernandinho, the man he has been bought to replace.

Many of the moments of sublimity which followed belonged to Liverpool. Salah operated at a level which promised much for the nine months ahead, though his finishing could have been better.

A cameo on the Liverpool right around the half hour mark told the story – Salah ghosting around Zinchenko, Otamedi and Silva in a tight space and emerging with the ball – and fully five chances fell to him.

His decision-making could be questioned when he beat Zinchenko on the ground and in the air before racing free to shoot against the base of the post after 15 minutes: Divock Origi was in a more promising position. But his enervating run through the City left to hit the post again, on the hour mark, told of a player who will start this campaign in a better place than the last.

The goal-scoring menace of Roberto Firmino was more fleeting – a half-volley on the spin after taking a high ball under control and looping it back over his head, in the game’s opening minutes.

The grounds for optimism, from a Merseyside perspective, reside in the very distinct hints offered here that a City rearguard without Vincent Kompany is diminished. The Belgian did not always operate within the structure but his departure removes the calm sense of order that any unit requires.

Nicolas Otramendi operating in his place, struggled to convince as he has always done at City. The young full back Oleksandr Zinchenko was second best to Salah in a difficult test. Guardiola sought out Kyle Walker for a talking to in which his discontent was transparently clear during a break in play, late in the first half.

City’s only second half chance arrived on a break-away in which Sterling, fed through the centre by Walker, dithered and allowed the ball to run to Alisson. But they were displaying that trademark capacity to grind wins out when the equaliser came, exposing the flaw at the back of the team once more.

A Jordan Henderson free-kick found van Dijk on the left of the box, from where his cushioned volley found the head of Joel Mati[, who got the better of Otamendi, to head home.

How City defied a Liverpool equaliser only Walker knows. After Zinchenko had been beaten again by the man he was trying and failing to mark, Salah raced through on goal, struck a shot which John Stones blocked and subsequently looped a header over Bravo which Walker arrived to clear from the line with a scissor kick.

There was time for Salah to feed substitute Xherdan Shaqiri for yet another strike at Bravo’s left post before the course of the 90 minutes was run. It brought the shoot-out from which City demonstrated their clinical streak.