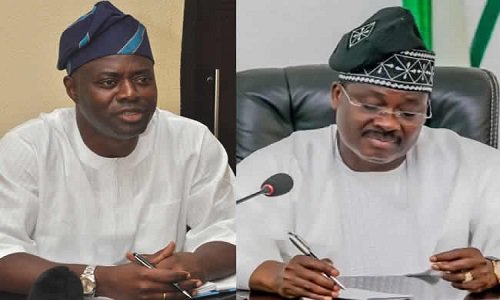 The rift over government vehicles allegedly taken away by former Oyo State Governor Abiola Ajimobi’s aides deepened on Monday as Governor Seyi Makinde accused his predecessor of distorting facts on the issue.

Addressing reporters after observing Eid prayers in Ibadan, the state capital on Sunday, Ajimobi faulted Makinde’s claims that his aides went away with government’s vehicles.

He explained that those who went away with government’s vehicles paid for them according to laid down procedure, adding that it was the standard practice.

Ajimobi said it was a needless move to rubbish his administration.

His words: “If we are talking about vehicles, I think papers have been written. When you are in government, there are policies to be taken. There are decisions taken. We’ve taken the decisions that anybody using vehicles at that time should pay and take it away. And that was what we did. Go to every state and even the Federal Government, there is nowhere in the world that people will work and not take away their vehicles when they are leaving.

“So, let them go and check many of those people in government, the civil servants. When I moved into the Government House, Agodi, I didn’t see any furniture. They took the whole curtains, furniture, chairs, tables, televisions, home appliances up till the last table spoon. Ask Governor Seyi Makinde if they took anything from the Government House, when he got there. But you know why? It was because I worked up till the last day in office.

The statement reads: “There should be no ambiguity about this issue of missing or stolen cars.

“The alarm raised by the government of Seyi Makinde on the unprecedented looting of official vehicles has nothing to do with cars that were legally sold or boarded to the different officials of the past administration.

“The vehicles we are concerned about are official cars carted away without legal instruments.

“Contrary to the statement of former Governor Ajimobi, many of the vehicles carted away illegally are new and in working conditions.

“You cannot possibly classify a vehicle procured in February of this year as an old car just a few months after it was purchased.”

It added that the government has no issue with vehicles properly boarded by past officials.

The statement stressed that the illegally taken away vehicles were not paid for by those involved.

“That is why a number of the vehicles have so far been retrieved.

“We must put on record that taking away government property is really a sad development in the annals of public accountability.

“This government frowns at any attempt to justify illegality. The government has sworn to always do what is right and so cannot ignore such misrepresentations.

“The first thing to say is that many of the vehicles were not boarded by officials of the past administration, but were taken away without payment.

“There is nowhere in the public service that a governor is allowed to gift public property to cronies like a Santa Claus.

“If the former governor claims that it happens elsewhere, that cannot be a justification. This government is determined to ensure that every kobo of taxpayers will be accounted for.

“We also restate our commitment to ensuring that all the vehicles illegally taken away are recovered,” the statement added.