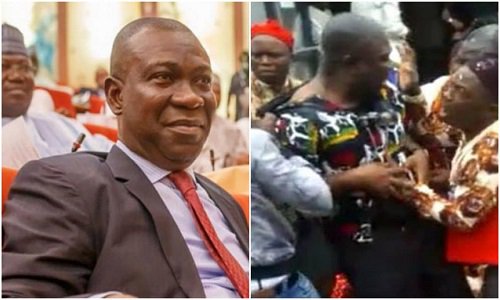 Ekweremmadu was attacked in Nuremberg, Germany, and the group further threatened to attack Southeast governors and other Igbo leaders anywhere abroad.

Obeta, who spoke at Christ Redemption Church on the Enugu Campus of the University of Nigeria (UNN), said Ekweremadu played a vital role during the struggle for Kanu’s release.

He noted that when he secured Kanu’s bail from the Magistrates’ and High Courts, he envisaged it would be difficult for Kanu to be released despite the court order but most Igbo leaders he called did not listen to him, hence he approached Ekweremadu.

Obeta said: “Once I got the bails at the Magistrates’ and High Court, it was obvious that the Federal Government would not release Nnamdi Kanu or obey the court judgment in that respect. I became very frustrated and resorted to Igbo leaders but most of the persons I reached out to did not listen to me until I contacted Ekweremadu and he agreed to help.”

Senator Shehu Sani has described the attack as a wakeup call for leaders in the country.

Sani, at the weekend, said: “I condemn the attack of my friend and brother, Senator Ike Ekweremadu, in Nuremberg, Germany, but it should be a wakeup call to everyone that if the state makes it impossible for people to express their opinion peacefully, legitimately and legally, it is pushing people to be hunters rather than protesters, to be mobsters, rather than “criticisists”.

“To protect our constitution, our democracy, there is that very need to respect the rule of law. State apparatus must not engage in indiscriminate arrest of people expressing their opinion, and using force to crush peaceful dissenters without expecting people to take the vigilante option in terms of defending their rights and getting to people in position of authority.

“Those who took to thuggery outside of the country were inspired by the way protesters and dissenters were treated by the state. There is no difference between the way my friend and brother was treated in Nuremberg, with the way protesters were treated in Lagos and Abuja by the state apparatus. So the state is the main culprit in terms of inspiring people to take the road, other than the one that is legitimate, legal and lawful.”