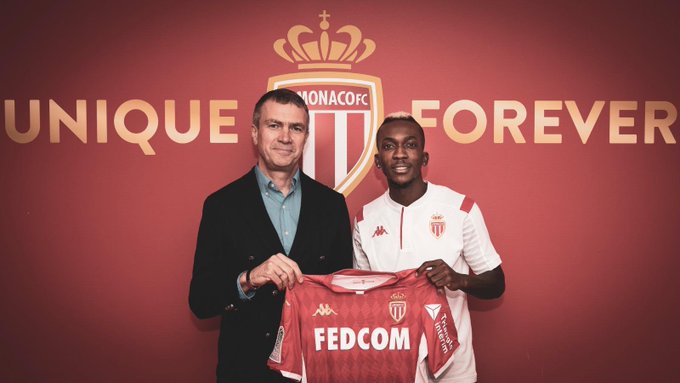 Super Eagles forward Henry Onyekuru finally bid goodbye to dreams of playing for Everton at least for now after he sealed a permanent deal with French Ligue 1 side AS Monaco on Monday.

Onyekuru signed for English Premier League side Everton in 2017 but never played a match for the Toffees, rather he was immediately sent on loan to Anderlecht and from Anderlecht to Galatasaray on another loan adventure.

The loan ritual however ended on Monday after Monaco announced it has reached and sealed a permanent deal with the 22 year old Nigerian who recently returned from the Nations cup in Egypt where Nigeria had a third place finish.

The deal which is put at about €15m (about N6.1billion) will see the former Eupen of Belgium star showcase his skills at the Stade Louis II for the next five years.

Onyekuru who scored 28 goals in 57 appearances for Eupen between 2015 and 2017, equally scored combined 23 goals for the two clubs he served on loan viz; nine goals for Anderlecht and 14 goals for Galatasaray.

The new move is providing a new opportunity for Onyekuru who has been tipped to be among the would be finishers for Super Eagles following the departure of Odion Ighalo from the Gernot Rohr tutored team.

Onyekuru will be hoping to follow the footsteps of  former international Victor Ikpeba who performed so well for Monaco while he was there that he was nicknamed “Prince of Monaco’.

Ikpeba made 170 appearances for Monaco scoring 55 goals before moving over to Bundesliga side Borussia Dortmund.

Ironically Onyekuru’s move to Monaco is coming at a time when the club has announced it has parted ways with its Director of Sports and former Nigerian international Michael Emenalo.

The club confirmed that Emenalo’s departure was by mutual consent.