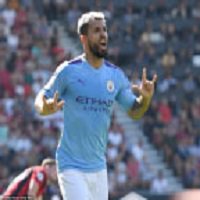 Pep Guardiola said Manchester City’s extra quality in attack made the difference as the champions powered to a 3-1 win at Bournemouth on Sunday.

Sergio Aguero struck twice to take his career goal tally to 400, while Raheem Sterling was also on target with his fifth goal in the opening three Premier League games.

And acknowledging his side had been forced to work hard for the win, Guardiola highlighted the ruthlessness of City’s finishing as the decisive factor on a hot day at Dean Court.

“It was a tough game, we knew it would be. We have seven points. We should have nine, but it’s OK,” Guardiola said.

“It’s a nice three points but we have a few things to improve. They were stronger than us in the boxes.

But the quality of our players in front made the difference.”

Aguero, who put City ahead in the 15th minute before claiming City’s third in the 64th minute, admitted he was unaware of having reached a career landmark.

“All the goals are important, I do not have a favourite,” he said.

“400 goals, wow! I did not know that. The goals are always important, you need them to win.”

Sterling added City’s second goal two minutes before the break and immediately before Harry Wilson brought Bournemouth back into the game with an outstanding free-kick.

Having started the season with a hat-trick in the 5-0 defeat of West Ham, Sterling struck against Tottenham before maintaining his scoring sequence against Bournemouth.

“We didn’t create so many chances today, but Raheem is still scoring goals, which is good for us,” said Guardiola.

David Silva made his 400th City appearance and marked the occasion by contributing to all three goals.

His pass for Sterling that set up the England international was particularly telling and Guardiola had high praise for the 33-year-old’s contribution.

“He played incredibly well. David in this kind of game ? with a defence so deep and with such little space ? is so good. He’s one of the best players I’ve ever seen,” he said.

Having had Gabriel Jesus’ late goal against Tottenham ruled out by VAR when the ball struck Aymeric Laporte’s hand on the way to reaching the striker, City again found themselves on the wrong end of a review.

Referee Andre Marriner rejected claims Silva had been tripped by Jefferson Lerma and his decision was supported by VAR, despite there appearing to be contact between the two players.

Guardiola, though, refused to criticise the match officials.

“The challenge this season will be amazing for us. It will be great after back-to-back titles.”

Bournemouth manager Eddie Howe was satisfied his side had presented a more testing challenge than they had in the corresponding fixture last season.

Then, they enjoyed only 18 percent possession and failed to muster a single shot on target.

“Compare this game to previous games against City, we created so much more, we were a constant menace to them,” he said.

“We were good physically in a really tough afternoon without the ball for long periods. The lads left

everything on the pitch, which is all I can ask for.”

Bournemouth left-back Charlie Daniels was stretchered from the pitch during the first half and Howe admitted the player could be out for some time.

“I know it’s potentially serious, seeing him on a stretcher with the amount of pain he was in. We’re

concerned for him, yes,” Howe said.