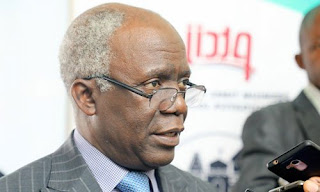 Activist lawyer Femi Falana (SAN) has urged President Muhammadu Buhari to direct all authorities to publish the names of all detainees in their custody and the locations they are being kept.

The latest demand is among the lawyer’s consistent actions, including writing letters to various authorities since May, on allegations of illegal detention against the Nigerian Navy (NN).

He urged the President to prohibit the police and other security forces from subjecting Nigerians to any form of incommunicado.

In a statement on Sunday in Lagos, Falana claimed that more relatives of victims arrested and detained for several months had contacted him, following his petition to the National Human Rights Commission (NHRC) last week.

“Following the publication of the contents of the said petition by the media, a number of the family members and friends of the majority of the detainees have reached out to us. Since the detainees were arrested by armed and masked naval personnel in mufti without any warrant of arrest and incarcerated incommunicado, it was thought by many family members that the detainees had been abducted and killed by hardened kidnappers.

“The most pathetic case is that of Ms Grace Inyang, who was arrested in Port Harcourt, the Rivers State capital, by masked naval personnel on October 27, 2018. She was driven to Abuja and dumped in an underground cell at the detention facility of the Defence Intelligence Agency (DIA).

“She was, however, transferred to the Nigerian Naval Ship NNS Beecroft detention centre at Apapa, Lagos, last week, for further incarceration. Even though the lady has spent 295 days in detention, the detaining authorities have not informed her of any criminal offence allegedly committed by her; neither has she been allowed to communicate with her relatives.

“The 56 men in the same detention facility at Apapa have been abandoned by the detaining authorities! Similarly, no one has attended to the other 10 citizens who have been detained inside a vessel in Marina, Lagos, for the past 13 months.

“By not notifying the family members and relatives of the detainees of their arrest and places of detention the authorities of the Nigerian Navy have wilfully violated Section 6(2)(b) of the Administration of Criminal Justice Act, 2015, which has imposed a duty on all detaining authorities to notify the next of kin or relative of every suspect of the arrest at no cost to the suspect.

“It is pertinent to note that the authorities of the Nigerian Navy have also continued to ignore court orders for the unconditional release of 15 of 67 detainees, including Navy Captain Dada Labinjo, being detained at the underground cell of the DIA at Abuja.

“Since the detention of the 67 citizens for several months without trial cannot be justified under sections 35 and 36 of the Nigerian Constitution, the Nigerian Navy ought to release them without any further delay.

“The illegality of the detention of the 67 people is compounded by the fact that the authorities of the Nigerian Navy have no powers under the Armed Forces Act to detain persons who are not subject to service law. However, if there is evidence that they have committed economic crimes, they should be transferred to the Economic and Financial Crimes Commission (EFCC) to prosecute them.

“Finally, we call on President Muhammadu Buhari to direct all detaining authorities in Nigeria to publish the names of all detainees and their places of detention and prohibit the police and other security forces from subjecting Nigerians to  any form of incommunicado detention,” said Falana.