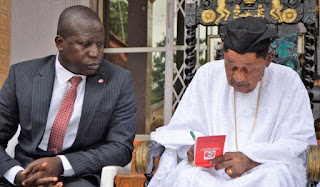 The Alaafin of Oyo, Oba Lamidi Adeyemi, has advised the nation’s anti-graft agency, Economic and Financial Crimes Commission, EFCC, to be more discreet and confidential in their fight against corruption, saying the success recorded by the agency has gone a long way in helping restore confidence to the image of the country.

This is as the monarch pledged his support and cooperation to the agency in the fight against corruption, saying the greatest gift the EFCC can give to the country is recovering all the nation’s wealth stolen by people.

The first-class monarch spoke while playing host to the acting chairman of the Commission, Mr. Ibrahim Magu, in his Oyo palace.

Magu was represented by the Ibadan Zonal Head, Mr. Friday Ebelo, who led other top officials of the commission to seek the collaboration and support of the monarch in the fight against corruption as parts of the plans to enlist people at the grassroots on the anti-corruption war.

The Alaafin, who noted that the eighth national assembly frustrated the confirmation of the appointment of Magu because they (the lawmakers) have skeleton in their cupboard, enjoined the team led by the anti-corruption czar not to be discouraged in the face of harassment and intimidation, noting that the nation depends on the efficiency of the agency and as such must not be allowed to fail.

Alaafin said, “Nigeria is very rich but what is killing us is corruption. Just this morning (yesterday), I read in the papers that the EFCC has been able to gather from fraudulent people N500billion. That attests to the efficacy of your work.

“Whether we like it or not, we must serve you. I must encourage you, we must support you, cooperate with you, otherwise what will kill Nigeria is corruption.

The fear of EFCC is driving some looters to several parts of the world, but you have been going after them and catching them. There is no hiding place for them and I want to commend you.

“The eighth national assembly tried to do everything possible not to get Magu appointed because they had a skeleton in their cupboards.”

Speaking earlier, Ebelo told the monarch that the team’s visit was at the instance of the commission’s acting chairman, who, according to him, has decided to engage the traditional institutions across the country in the campaign against corruption in order to get the message down to the grassroots more effectively, assuring the monarch that Magu would soon visit him personally.

Ebelo said, “The EFCC Ibadan zonal office is visiting the Alaafin of Oyo on behalf of EFCC acting chairman, Ibrahim Magu, to rally the traditional institutions’ support in the fight against corruption and other issues coming up in recent times.

We now have cybercrime and internet-related frauds that youths of late are getting themselves involved in.”