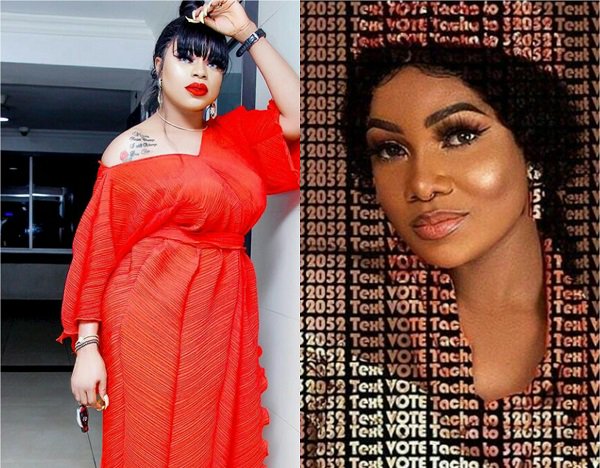 The Big Brother Naija season four is getting more interesting every day, as this week’s eviction is going to take another dimension.

Last week, Biggie divided the housemates into two group, namely: the ‘Icons’ and the ‘Cruisetopia’.

After failing their task, Biggie placed the The ‘Icons’ of the ongoing fourth season of the Big Brother Naija reality show, for possible eviction.

Diane use her power to save and replaced a Housemate.

She saved Sir Dee and replaced him with Joe, putting him in the list of those up for Eviction.

This has since triggered fans all over the continent and beyond to start voting for their favourite house mate.

Urging his followers to start voting massively for her.

He assured Tacha that she will be staying in the house till 99 days.

Claiming that Tacha has always been a good fan of his, before she entered the big brother house’.

He said “we are not surprised you are up for possible eviction this week again. Baby chill and relax your Bobrisky is here for you, you are staying in that house till 99 days.”

One of his followers then quickly reacted by commenting “Bobby you are on your own this time ooooo, tomorrow another Nina will show her real self.”

Bobrisky then replied her saying “naaa Tacha has been my baby for years…. She has always been a good fan, before she entered the big brother house.”

Bobriskyended up by saying ‘No Tacha No Big brother.