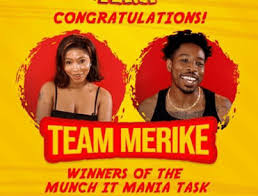 The gangster couple of the ‘Pepper Dem’ house Mercy Eke and Ike Onyema won two million Naira in the ‘Munch it’ challenge.

News Agency of Nigeria (NAN) reports that the couple tagged ‘MerIke’, also won dinner in a canoe and were treated to an in-house dinner by Biggie on Saturday.

The ‘Pepper Dem’ gang took on the ‘Munch It’ Challenge to test the Housemates’ creativity, wit and dance moves.

The first task was the ‘Munch It’ Art Challenge. Housemates were asked to create a stunning piece of art using Munch It.

The fun part of this Challenge was that while one Housemate created the art the other partner was given the freedom to distract the other Housemates.

The Dance Challenge was next as Housemates picked a dance direction from Cultural, Contemporary and Hip Hop Dance.

The Housemates developed a comprehensive dance choreography based on their chosen direction and also in line with the Munch It song, both dressed in the same onesie.

NAN reports that Ike and Mercy, on theor part, had issues that had more to do with personal issues than the dance.

Frustrated by their unimpressive dance moves, Ike expressed that she was tired and insisted that she would rather play this game alone. She also rebuffed Ike’s suggestion of stealing dance moves.

Shortly after, superstar Dance Choreographer, Kaffy paid a visit to the House to show the Pepper Dem gang ways to choreograph their moves.

Kaffy took time to coach and give each of the Pepper Dem pair dance tips in their quest to deliver a spectacular show.

Despite the challenges the MerIke pair had, they emerged winners of the Munch It challenge as they received the highest votes.

Fans of the pair have taken to social media to congratulate the couple while some fans of other pairs expressed displeasure at their performances.

@Celeste_tweeted, “Awwwwww I wanna cry.I’m so happy y’all #TeamMerike I Stan my babies forever I love you team mates!!!!!! Cheers to you sweethearts.”

@Joneslotty said, “Nothing is as sweet as watching Ike And Mercy winning this Munch It challenge. Much love .My Mercy and Ike all day everyday…#BBNaija”

@Charlestara said, “Whoever is not pleased with this should go and start their own bbn oooooo. This is how we roll. I Stan Gangster couple till final day.”

@Mercychibike said, “I’ve been a Mercy fan from day 1 but Tacha and Elo deserve to win this . #BBNaija”

@Anitaframe3 tweeted, “It wasn’t a fair one biggie.. we’re more scared of the final votes of the game. Not Fair @MunchITNigeria”