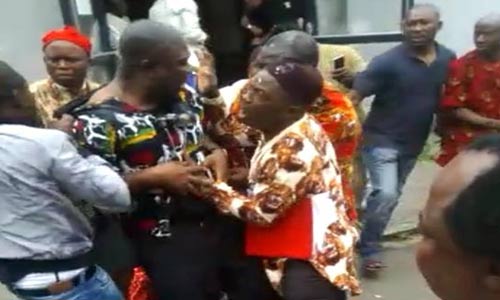 The former Deputy Senate President was reportedly attacked by some members of Indigenous People of Biafra (IPOB) in Nuremberg, Germany on Saturday.

Abaribe gave the condemnation in a statement he personally signed in Abuja on Sunday.

News Agency of Nigeria (NAN) had on Saturday reported that Enweremadu was physically attacked by the IPOB members who accused him of not partnering them.

They accused the senator of conspiracy in the events that led to the proscription of the group by the Federal Government in September 2017 through the Federal High Court Abuja.

Abaribe also described the attack by those in Germany as a despicable act.

He said it smacked of utter ignorance of the prevailing situation at home with regard to what Enweremadu and other Igbo leaders were doing in the circumstance.

“It is a brazen show of ingratitude to a man who has been at the fore front in the struggle for all that is good for the Igbo race,” he said.

He said he and the entire minority caucus in the ninth senate were appalled on the attack.

“Senator Ekweremadu he said has given his all in standing for the Igbo race, particularly when “we stuck out our neck to arrange and stand for surety for the IPOB leader, Nnamdi Kanu.

“Obviously this is not how to repay a man, an outstanding leader of men, an unpretentious Igbo leader who has given his all even going as far as deploying his means to arrange for the bail of Nnamdi Kanu.

“This was not minding the repercussions to his illustrious political career.

“It is unfortunate. The perpetrators of the attack should know that as Igbos, we respect elders and reverence our leaders.

“The unwaranted attack is not the character of the Igbo. This is un-Igbo.

“It is most worrisome and even inconceivable that the attackers will choose an auspicious occasion where our people are celebrating and showcasing our rich culture to exhibit such unbecoming and condemnable conduct in the name of agitation.

“No, that was not agitation, no right thinking human will identify with such behaviour.

“Yes, Nigeria is going through a horrendous phase, which is a fault line that its leaders, particularly we the Igbo leaders are engaging others to find a lasting solution to.

“Resorting to mob mentality and venting the spleen on our leaders rather creates a vacuum that will leave our people helpless and confused in the circumstance,” he said.

He said that there are rules of engagement in any country where things go awry and that should be the way things should go at all times, rather than resorting to physical assault.

He, however, appealed to Ekweremadu not to be discouraged in any way, but rather take it in its stride as the price often paid in leadership.