Another Nigerian killed In South Africa 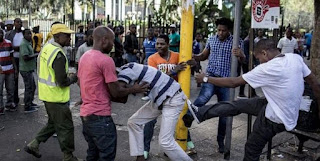 Another Nigerian has been killed in South Africa, according to information from Johannesburg on Saturday.

Simeon, a Taxify driver, was allegedly shot by yet to be identified gunmen in the early hours of yesterday in Johannesburg.

The spokesperson for the association, Mr. Sunny-Wenike Douglas, said the victim was killed moment after dropping off his clients in a part of the city.
Douglas added that an investigating officer with the South Africa Police Service confirmed that a case of murder had been opened on the matter.

He vowed that his association would follow up with the case to ensure that the killers were arrested and brought to justice.

On June 12, a Nigerian insurance officer, Mrs Obianuju Ndubuisi-Chukwu, was murdered in South Africa while attending a conference there.

Her killing was followed shortly by the murder of a Nigerian teenager who was also shot dead in Johannesburg.