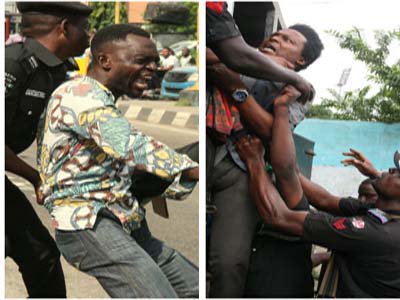 It was an anti-climax.

The much-expected #RevolutionNow protests billed for 21 cities on Monday ended before it even began.

To the Presidency, Nigerians shunned the protests because of their preference for democracy.

“The President is humbled by the support – not for himself or the governing party – but for the democratic values of modern day Nigeria through the wisdom of those millions of citizens who preferred democracy and decided not to undermine an elected government,” said a statement by presidential spokesman Garba Shehu.

But the organisers remained defiant, saying “no retreat no surrender”. The Police replied that they would meet them on the streets.

Those in the revolution vanguard and some activists called for the release of the chief organiser of the protests, Mr. Omoyele Sowore, who is being held by the Department of State Services (DSS).

Sowore was the candidate of the African Action Congress (AAC) in the February 23 presidential election.

More activists were arrested. Also held is The Nation reporter in Calabar, Cross River State, Mr. Nicholas Kalu, who was taking photographs of the protests in the city. Some AAC members were also arrested in Calabar.

Security operatives deployed to stop the protest outnumbered the protesters.

The protest was billed to kick off at the National Stadium, Surulere, Lagos Mainland, but the first four protesters got there at 8:15a.m. They loitered around the locked and well-guarded stadium gate.

The massive deployment was in anticipation of a huge turnout of protesters.

Reporters, who got to the scene around 6:30am, said the number of protesters grew from the initial four to about 10 around 9am. The protesters were dispersed by the security operatives.

They said: “When we got here, only policemen and soldiers were here. The stadium gate was locked and athletes who usually come to the stadium for training were practising outside.

“They (security) didn’t allow anyone in and they didn’t harass us either. The first four protesters got here around 8:15am. They were not wearing a uniform. Around 9am, the number grew to 10 and they started gathering confidence and were moving towards the Stadium gate.

“The security men came and asked them who they were and that if they weren’t journalists and had nothing to do in that place, they should leave. At first, they were stubborn, saying they had a right to peaceful assembly and protest. But the policemen teargased them; they disappeared.”

A mild drama ensued about 90 minutes later when the protesters resurfaced in a van.

As they advanced towards the stadium, singing solidarity songs, the security operatives released three canisters of teargas.

The protesters, coughing, scampered to safety as their van veered off the road and hit a brick.

The security men drew their guns, aiming for the next approaching van, but stopped on discovering the van was not conveying protesters.

The protesters then headed for the Committee for the Defence of Human Rights (CDHR) in Ikeja, where another drama ensued between a journalist with the Sahara Reporters’ Victor Ogungbenro and security operatives who fingered him for alleged inciting comments.

There was a scuffle as the reporter resisted attempts to take him away.

At a news conference with about 30 people in attendance, including some of the organisers, Toyin Raheem, Kunle Wiseman Ajayi, Sango Omojola, Seni Ajayi, Okikiola Johnson, Gbenga Komolafe, Ray Olorumboye, Philip Ogbodo and Olanrewaju Omolola, the coalition accused the police of shooting live bullets at peaceful protesters and using maximum force.

The coalition reminded the police that Civil Society Organisation (CSO) protested to ensure better welfare for them. It claimed that the securitymen shot people in Lagos, University of Ibadan and Benue, among others.

The group said: “We are collating the list. As we speak, not only in Lagos, at least for some of you who were in Lagos and witnessed it at the stadium, you saw that many people were shot at. At our last count in Lagos, about five persons have been arrested: Sanyaolu Juwon, Banwo Olagoke, Gabriel Ojuma, Elvis, Elias have been arrested.

“Also, a journalist with Sahara Reporters has been arrested and brutalised. Then one of the passersby who we saw with a Nigerian flag, which we didn’t use because we used orange berets, was arrested and beaten too. I am suspecting the Nigerian flagged person might be a member of Enough Is Enough group, which also subscribed to the Coalition for Revolution.

“Some of us have many of these footages and I know that there are some of the press persons that have them as well. We have information that in Benue, Comrade Rex and a lot of other comrades were arrested, beaten and whisked away.

“In Osun State, students of the Obafemi Awolowo University (OAU), Osun State University, Osun State College of Education, Ilesa, Osun State Polytechnic, Iree and many others were arrested today too.

“In Ibadan, Gbenga and many of the students at the University of Ibadan at the front gate were arrested. In Abeokuta, our comrades were attacked. Some of them who escaped arrest are being chased around by thugs of the Ogun State Government. In Rivers State, Governor Nyesom Wike did not only threaten to arrest our members, he sent the military and the police to go and attack them at their houses as early as possible.

“What we want to say is that all of these persons must be immediately released with apologies. Nigeria cannot continue this way and President Muhammadu Buhari should know that the Coalition for Revolution is not in conjunction with anybody abroad.

“The coalition for revolution is a coalition of all oppressed Nigerians and that is why veteran leaders of the civil society organisation are here.  We are well trained, well nurtured, well-educated because you have not given anybody job anymore in Nigeria; the battle continues.”

Ajayi, the coalition spokesman, said its agitation was ideological and peaceful. He accused the government of aiding violence because it has things to hide.

He said: “They have demonstrated it; they have shot people; they have arrested people and it is clear. We raised that alarm to the world that these processes are developing. We also emphasised that this agitation was formalised today officially.

“As from today the agitation against this crime called leadership will be carried out and millions of people will join whether they like it or not. We are prepared for that and that is our line of action.

“It is important to orientate the Inspector-General (IG) that the civil society organisation has no obligation to seek any permit in the conduct of any protest. We are lawful citizens; we have only called for a peaceful demonstration and it is peaceful so far.

“We want the IG to retract that statement that they will not allow us embark on whatever protest or agitation we want to do. We are not Boko Haram, we are not the insurgents they should be going after. We still have many in captive; Leah Sharibu is there that we are looking for and thousands of Nigerians have been kidnapped, that they should be occupied with.

“Moreso, we also need to remind President Muhammadu Buhari that in 2012, the government of Goodluck Jonathan tolerated them enough when they embarked on protests throughout the streets of Lagos and Abuja, unhindered; nobody disturbed them and here we are today, under an acclaimed democratic government obstruction of peaceful movement. We want to say to Nigerians that it is no retreat, no surrender.”

A woman, who claimed she was nearly hit by a bullet at the stadium, said it was shocking for the police to claim that no bullet was fired. She faulted IG Mohammed Adamu for describing the #RevolutionNow protests as treasonable felony.

But the police said they only used minimum force to disperse the crowd.

Lagos Command spokesman Bala Elkana, a Deputy Superintendent of Police (DSP), confirmed that nine suspects were arrested, adding that they would be charged to court.

He warned the organisers to stop the protest to avoid the wrath of the law.

Elkana said: “If they say they will continue, we too are ready. It is very untrue that gunshot was fired. No single bullet was released. The picture they are talking about, did that look like a bullet wound? We appreciate Lagosians for going about their lawful businesses and urge them to continue to disregard any call to revolution.”

The much-anticipated mass protest was reduced into a one-page letter delivered to the Abuja headquarters of the National Human Rights Commission (NHRC).

Contrary to expectations, there was no mass protest in Abuja.

Armed security personnel were all over the place, patrolling in convoys.

NHRC spokesman Lambert Oparah told The Nation that around 10 am, he met about 12 protesters at the office gate while their colleagues huddled in vehicles parked nearby because of the heavy rain.

Deji Adeyanju and Ariyo-Dare Atoye, who signed the letter addressed to NHRC Chairman under the name of “Concerned Revolutionary Activists”, led the team.

Oparah said: “They say there are two urgent cases – the recent arrest of Omoyele Sowore by the DSS and they talked about continued harassment of Amnesty International.

“They also spoke about the limitation of citizens’ protests in Abuja to the Unity Fountain and the restriction on citizens’ right to demonstrate.”

On what to expect next, he said the complaint might have to do with their “inadequate understanding” of how the NHRC carries out its responsibilities.

Adeyanju said: “We have received their complaints and even before now, we had addressed some and we made a statement asking those who are holding Sowore to either release him or charge him to court; we are hoping that action would be taken to get him to appear in the court and answer charges –  if there are any.”

Oparah recalled NHRC’s role in demanding the release of Adeyanju, when he was taken to Kano.

In the letter titled: “NHRC must act to defend our democracy from tyranny”, the protesters alleged that NHRC needed to rouse itself from sleep.

They said: “We write to express our displeasure with your continued silence over the undemocratic incidences that are happening in the country. We are even more displeased by your silence in the face of the alarming human rights abuses considering the consistency of such anomaly under the present regime.”