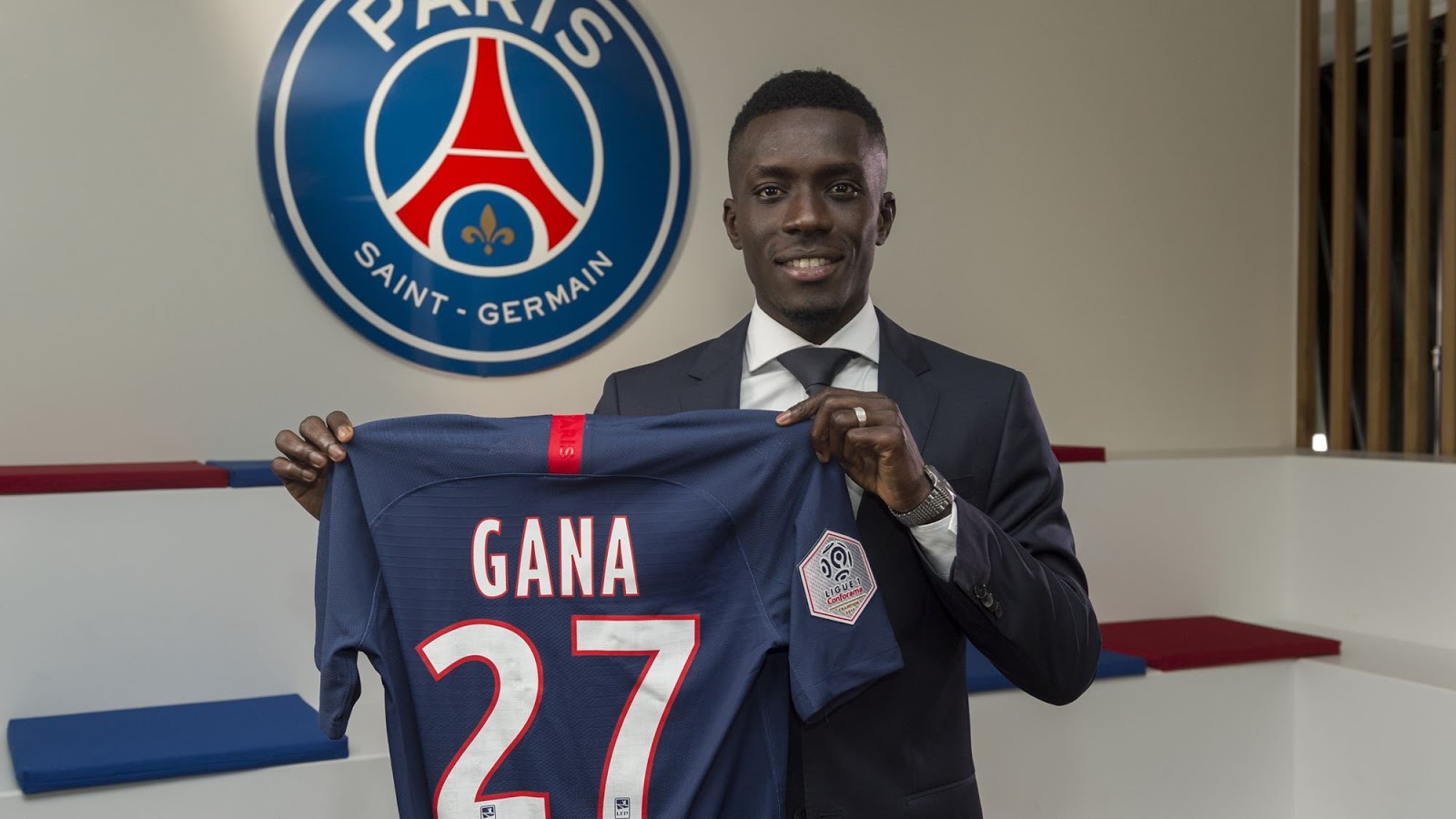 Idrissa Gana Gueye's career at Everton is over after his long-awaited transfer to Paris Saint-Germain finally went through this morning. The midfielder joined the club from Aston Villa in 2016, and moves to the Parc des Princes on a four-year deal.

"I’m immensely proud to sign for Paris Saint-Germain," the midfielder said. "After focusing on the AFCON with Senegal, I wanted to give a new boost to my club career by joining PSG, one of the most structured and ambitious sports projects in Europe."
Everton fans, don't watch the twitter announcement below if you're squeamish.

PSG have signed Everton midfielder Idrissa Gueye for an undisclosed fee, reported by Sky Sports News as around £29m.


MILLWALL CLOSE IN ON DUO

The Lions, who secured the signing of Bristol City goalkeeper Frank Fielding earlier in the summer, have been searching for another stopper following the departures of David Martin, Jordan Archer, Tom King and Ben Amos.

Millwall forward Tom Elliot will join Ipswich on loan as part of the deal.

It could be a busy few days at The Den, as it is also understood they are close to securing the permanent signing of Wycombe defender Jason McCarthy.

This deal will see winger Fred Onyedinma move to Wycombe on a permanent basis.

It's all happening at Old Trafford. Juventus have edged ahead of Inter Milan in the race to sign Romelu Lukaku - with Maurizio Sarri's side willing to include Paulo Dybala in any deal to sign the Belgian.

That Harry Maguire interest mentioned below has left the Leicester defender 'furious' according to The Sun, with the Foxes demanding a world-record fee for a defender if they are to let him leave the King Power Stadium.

The paper reports Maguire feels club vice-chairman Khun ‘Top’ Srivaddhanaprabha is being 'awkward' with United over the move.

Leicester goalkeeper Kasper Schmeichel says he and his team-mates are not at all surprised by Manchester United's transfer interest in Harry Maguire.

Danny Rose has been included in Spurs' Audi Cup squad for their game with Bayern Munich today - suggesting a move away from the club still has a way to go.

Earlier this month Spurs said the left-back was "exploring an opportunity away from the club", but with barely a week left of the transfer window he remains a Tottenham player.

Rotherham have signed Trevor Clarke from Shamrock Rovers on a three-year deal.

The 21-year-old made close to 100 appearances for the Hoops during four years with the League of Ireland Premier Division side before his switch to the New York Stadium, which is pending international clearance.

Clarke has represented Ireland at U16, U17 and U19 level and was called up to the U21 squad last season.

He was on the books of Middlesbrough as a youth player before he returned to Ireland.

SSN reporter Kaveh Solhekol says he has been informed that Everton have put in a second bid for Crystal Palace forward Wilfried Zaha - although the Merseyside club deny the reports.

'BALE COULD AIM TO OUTLAST ZIDANE'

Gareth Bale could opt to stay at Real Madrid and outlast Zinedine Zidane at the club, says The Transfer Show's Dharmesh Sheth.

Bale looked to be set for a move to Chinese Super League side Jiangsu Suning, but the deal fell through.

"I'm just wondering whether Gareth Bale is now looking at it and thinking that he's going to stay at Real Madrid, he's still under contract, the average tenure of a Real Madrid manager is 18 months," he told The Transfer Show.

"Does he think that he could outlast Zinedine Zidane for a second time?

"He's done it once before, can he do it again? Don't rule out Gareth Bale staying, biding his time, seeing how it goes at Real Madrid, and then moving on."

Everton have responded to reports earlier that they had made a second bid to Crystal Palace for Wilfried Zaha.

According to Sky sources, the Merseyside club have offered £55m plus forward Cenk Tosun and midfielder James McCarthy, after they made a £55m cash-only bid, which was rejected.

However, the Toffees have denied this, saying in a statement: "Everton Football Club categorically denies that a bid has been submitted to Crystal Palace for Wilfried Zaha that included an increased sum plus Cenk Tosun and James McCarthy.

"Everton and Crystal Palace have a very good relationship. A bid was made over the weekend which was turned down. Both Clubs agreed that was the end of the matter."

Lukaku has been left out of United's travelling squad for Tuesday's friendly against Kristiansund in Norway, having missed all four matches on their pre-season tour of Australia, Singapore and China due to knocks.

The Belgian international also posted a photo on Instagram with his agent, with the caption 'Soon to be continued'.

"We made an important bid to Man United for Lukaku (£54m) but Man United ask so much for Romelu.

"We didn't find an agreement but we're still working for Lukaku. I don't know what will happen on next days, football is so strange. We have made a fair and important offer respecting the value of the player."

Carlisle have bolstered their squad ahead of the new Sky Bet League Two campaign with the additions of striker Olufela Olomola and defender Aaron Hayden.

Olomola has moved to Cumbria on a season-long loan from Scunthorpe, while Hayden has signed a one-year deal with Carlisle after a successful trial.

Olomola spent the first half of the 2017/18 season on loan at Yeovil from Southampton, where he scored seven goals in 21 games.

He moved to Scunthorpe in the summer of 2018 on a three-year deal and enjoyed a second loan spell with the Glovers last season, scoring three goals in 21 games.

Hayden started in the Chelsea youth system before switching to the Wolves academy when he was 16.

He has enjoyed loan spells with Newport, Hemel Hempstead, Bromley, Telford and Stourbridge before becoming a free agent over the summer.

'IT WON'T BE ENOUGH TO CONVINCE PALACE TO SELL'

SSN reporter Kaveh Solhekol tells us whether Everton are likely to succeed with their latest bid to sign Crystal Palace forward Wilfried Zaha.

"I'm not sure that this will be enough to convince Crystal Palace to sell because they have kept to the line all summer that Zaha is not for sale.

"Secondly, if he was to leave, it would take something close to £80m for that to happen.

"And Zaha himself really had his heart set on a move to Arsenal, but that does not look like it is going to happen. So time is really running out and as far as Palace are concerned, they do not want to sell Zaha and then not have time to sign a replacement.

"But they are being put under pressure by Everton and we know Palace have been interested in signing McCarthy, so he is a player who is of interest to them. We were told they had made a bid for him a couple of weeks ago.

"Tosun as well is an interesting case - Palace were interested in signing him before Everton signed him, so it is not two wildcard players who Palace have no interest in."

BEES CLOSE IN ON VALENCIA

Brentford are closing in on the signing of Ecuadorean forward Joel Valencia, according to Sky sources.

The club are in advanced discussions with the 24-year-old’s current club - Polish top-flight side Piast Gliwice.

Valencia was born in Ecuador, but played 12 times for Spain’s U17 side in his youth.

The playeer scored six goals in 33 appearances in Ekstraklasa last season and has played for Piast Gliwice in Champions League and Europa League qualifying.

The Bees have been in the market for another forward this summer regardless of any interest in their current players.

Everton have made second bid to Crystal Palace for Wilfried Zaha, according to Sky sources.

The offer is believed to be worth £55m, plus Cenk Tosun and James McCarthy.

Manchester United will have to pay £90m if they want to sign Harry Maguire from Leicester, one source has told Sky Sports News.

Talks are continuing between the two clubs, however, we understand that they remain well apart in their valuation of the player.
Maguire didn’t take part in Leicester training today.

As we told you a fortnight ago on SSN, Maguire has informed Leicester he wants to leave before the window shuts on Aug 8.
Maguire remains United boss Ole Gunnar Solksjaer’s No 1 transfer target.

Rochdale have signed midfielder Jimmy Ryan on a two-year deal after he rejected a new contract with Blackpool.

Ryan has made nearly 400 appearances after starting his career with Liverpool, where he was part of the FA Youth Cup winning sides of 2006 and 2007.

He has also had spells with Shrewsbury, Accrington, Scunthorpe, Chesterfield and Fleetwood before joining Blackpool in the summer of 2017.

Cambridge have signed striker Andrew Dallas from Rangers for an undisclosed fee.

The 20-year-old has agreed a two-year deal at the Abbey Stadium after a successful two-week trial.

Dallas came through the academy at Ibrox and made his professional debut last season on loan at Stenhousemuir, where he scored three goals in six appearances before ending the season at Morton, where he played a further 12 times.

Cheltenham have confirmed the signing of midfielder Max Sheaf on a six-month loan deal from Hull.

Sheaf, who has made one first-team appearance for the Tigers, has joined up with his new team-mates and is eligible to play in the first game of the season against Leyton Orient on Saturday.

Danny Rose has been included in Tottenham's squad for their Audi Cup clash with Real Madrid in Munich tomorrow.

The England left back was left out of the Spurs squad for their recent tour of Asia, with the north London club granting him additional time off in order to explore opportunities to find a new team.

Lee Bullen will take charge of Sheffield Wednesday for their first Championship match of the season against Reading.

Wednesday are still seeking a full-time replacement for Steve Bruce, who left the club to become Newcastle manager earlier this month.

Philip Billing has completed his move from Huddersfield to Bournemouth.

It is understood a fee, in the region of £15m, has been agreed for the midfielder.

Here’s some developments on Manchester United’s pursuit of Harry Maguire.

Talks are continuing between Manchester United and Leicester City over the transfer of Harry Maguire, however Sky sources understand that the two clubs remain well apart in their valuation of the player.

Leeds United have announced that Connor Leak-Blunt has signed a professional contract with the club.

The 17-year-old who has been with the Leeds United Academy from the age of eight, has penned a three-year-deal running until the summer of 2022.